Say Hello To The Nomads of Bhutan

Merak-Sakteng and Laya stands out as a distinct attraction in Bhutan. Unlike anywhere else in the country, it offers a visitor to experience a unique semi-nomadic lifestyle, culture and vernacular in one of the most scenic pastoral valleys .

Twin Jewels of the East Long closed to outsiders, the beautiful far flung regions of Merak and Sakten present Bhutan travelers with the unique opportunity to see two of the least known valleys in the kingdom. Take a trek to the sacred mountain of Jomo Kuengkhar in Merak (from where it is said the plains of In - dia are visible a clear day) witness the yak dances unique to the region or catch a performance of the famous nomadic opera, Ache-Lhamo. Experience the stark wilderness and the simple generosity of the Brokpa people, learn how their traditional garb is still fashioned from yak skin and listen to timeless tales of the yeti which form an inseparable part of Brokpa lore. Journey into the hidden valleys of Merak and Sakteng and discov - er the exquisite eastern wilderness of Bhutan.

Situated at an altitude over 3,500 meters, the ex - otic valleys of Merak and Sakten have been home to the Brokpas for centuries since their displace - ment from Tsona in Southern Tibet. The nomadic indigenous group of eastern Bhutan, the Brokpas seasonally move their herds of livestock from the lower valleys in the winter to the higher pastures in the summer. While polygamy is a prevailing prac - tice as well, marriage among Brokpa couples is a convergence of practical consideration and sacred responsibility, with elaborate rituals to seal the union. Like the rest of Bhutan, they are fond of ar - chery and are skilled in games of accuracy. Women are particularly well-known for their singing and they love to perform from their wide repertoire of festive songs dedicated to gods and goddesses, as well as the universal themes of nature, youth and old age. Brokpas prefer to wear their traditional attire spun from yak hair. Traditional wear for men comprise a black hat with five long fringes hanging from the sides. The upper part of their body is covered by a thick jacket with a vest of animal hide tied at the waist by a long belt known as a kera. For the lower part of the body, traditional fashion dictates a knee length pair of shorts called kongo. Women usually wear their long hair tied up in plaits with colorful ribbons. An apron reaching to their knees is tied at the waist. Woven out of raw silk, the wom - en’s dress is designed with colorful motifs of ani - mals and flowers. Fond of jewelry, they wear long strands of corals, cat’s eyes and necklaces of semi precious stones. 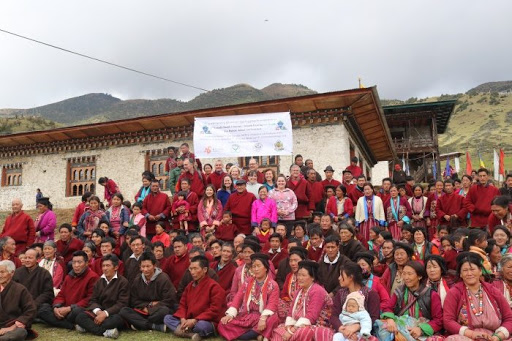 The diverse rituals and customs of the Brokpa people make Merak and Sakten an interesting place to visit, especially each autumn when they honour their mountain goddess Jomo Kuengkhar by observing a two-day festival to seek her blessings for prosperity. The festival is also an occasion to witness the annual naked terchaam dances of the Brokpas and the cultural splendor of the Ache Lhamo dances performed by herders annually to honour another feminine divinity sacred to their people.

There are several interesting temples and monasteries in both valleys: The Borangtse Lhakhang, the Guru Goemba and Labrang Lhakhang. At the Gengo Tashicholing temple in Merak, established in the 15th century, it is possible to see the remains of its founder. In the Samtencholing Lhakhang it is possible to view what is purportedly the ancient saddle and the phallus of goddess Jomo’s horse.

The SaktengWildlife Sanctuary isspread over 650 sq. kilometers and is the only reserve in the world dedicated to protecting the habitat of the yeti or abominable snow man. The sanctuary is mountainous and rugged and boasts a diverse variety flora and fauna . Population of snow leopard,red panda, Himalayan black bear, barking deer and the Himalayan red fox have been recorded in the region. The park also has rare blue poppies,Bhutan National flower. Premilus and gentiania. that explode in a riot of colors in the spring.

Things to See & Do

On landing at the International airport at Paro, drive to Thimphu, the capital. The next day transfer to Bumthang in Central Bhutan and from there to Trashigang, the furthest eastern region of Bhutan. Overnight in Trashigang, and the following morning take the road further east to Radhi village which is about 21Km and takes about an hour.  After Radhi there is a dirt road that leads to Merak Village. It is about 40Km and takes about 3 hrs to reach there.

From here Merak is an easy walk along the Merak river, also called the Ngera Ama river. Sakteng:

Sakteng is better approached from Merak. From Merak a full day’s trek brings you to the riverside campground at Miksa Teng, from where it is a gradual three hour walk through some pleasant woods until your arrival in Sakteng.

For your exit from the twin valleys, hike from Sakteng to Jonkhar village down the deeply forested slopes. Hike another three hours from Jonkhar to Phongmey and then drive to Trashigang, passing the famous Ranjung Monastery and the rice terraces of Radhi village, often called “the Rice Bowl of The East”.