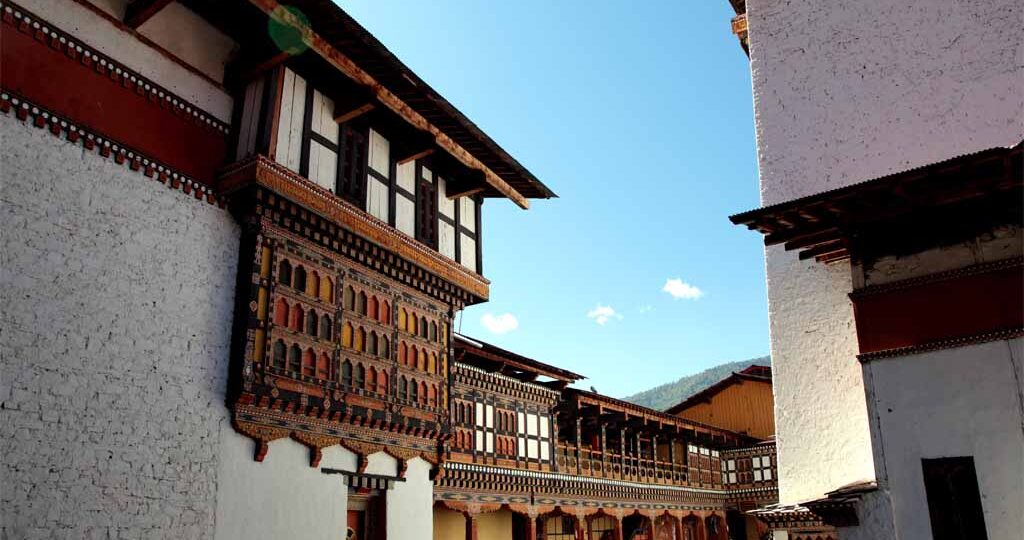 One of the first things that comes to one’s mind when talking about Bhutan is probably the architecture and its strong association with the Bhutanese culture. One such distinctive architecture that you will see all around Bhutan are the fortresses (commonly known as Dzongs) which are Bhutanese architectural masterpieces built in the past to serve several purposes.

Dzongs are traditional Bhutanese fortresses, built across the country during the 17th century as a defence against attacks from Tibet. They are uniquely constructed without any nails or iron bars but by spiritual inspiration which gave direction for constructions and later decorated with traditional Bhutanese woodwork and intricate art.

Fortresses are beautiful and hold a very important religious position in the country. The dzongs in Bhutan serve several purposes. The fortresses serve an administrative and religious purpose. A part of the building is dedicated to administrative purposes and its other part of the building to the monks for religious purposes. Generally, this distinction is made within the same room from where both administrative and religious activities are conducted. There is separate accommodation for the temple monk’s adjacent to the main building. The construction of the dzong is such that there is a huge tower in the center which is surrounded by a rectangle complex. The whole complex looks extremely stunning amidst the high mountain ranges of Bhutan.

Bhutan has several fortresses all around the country and here are the most famous ones which you must visit to seek serenity and peace.

2. Paro Dzong Paro has Bhutan’s only international airport. It’s impossible to miss a fortress-like structure jutting out from the hillside and overlooking the quiet city below. Paro Dzong is located in the Paro district of Bhutan also known as Rinpung Dzong is one of the most famous dzongs in Bhutan. Paro district is considered one of the most scenic of the country and an attraction for the travelers and Buddhist scholars. It is located on the banks of the Paro Chhu river connected by a small bridge. It is one of the most eminent monasteries and teaching school which belongs to the Drukpa ancestral lineage. Paro Dzong is known for its celebration of Paro Tshechu, the great annual festival of Bhutan. All government administrative purposes take place here.

Punakha Dzong is Bhutan’s most beautiful fortress and the biggest tourist attraction.  It is located between the intersection of 2 major rivers male and female rivers that interprets as a symbol of the country’s unity. It is the second-largest Dzong and served as home for the central government under 1907. It is unique and has three large courtyards inside. The central watchtower stands significantly higher due to the dzong’s low lying position. The prime attraction in the dzong is the third courtyard which is home to the main temple and the hundred pillar assembly hall. The detailed and colorful murals painted on the walls inside provide an insight into the history and beliefs of Buddhism in Bhutan.

Tashichho Dzong reflects the history of Bhutan. It is located on the northern edge of Thimphu and river Wang Chu flowing along its bank. Tashichho Dzong means ‘the fortress of the glorious religion” and is home to both religious and administrative activities. As located in the vicinity of the mountains and lakes, Tashichho Dzong is the reflection of the Buddhist culture and religion. The building has been renovated many times due to the natural disasters and due to its conquer by different rulers. The building is full of white walls and wooden exteriors with detailed artistic woodwork in the interiors. The south part of the building is dedicated to the government officials and in the west; a tower has been dedicated to the Shakyamuni Buddha statue. It was also the house of the royal family of Bhutan until they shifted to Dechencholing Palace.

Lhuntse Dzong is one of the prominent fortresses of Bhutan located in Lhuntse district at the Kuri Chhu Valley with the major river Kuri Chhu flowing in the vicinity. The valley is known for its refreshing beauty of the hills and rivers and gives this dzong an important location of the country. The fortress is perched at the mountain ridge which gives it the view of the whole valley and offers the beautiful sceneries of the country.

Jakar Dzong is located in the Bumthang district. The valley is known for its high mountain ranges and passes. This Bhutanese dzong has played an important role in both religious and defense purposes. The strategic location of the dzong and attempts to conquer the dzong has to lead to several encounters but the edifice stands strong to date.

It is believed that the Landscape of Gasa has the appearance of Goddess Tsheringma(The Goddess of long life) and the beautiful Gasa Dzong is supposed to be built on her chest.

The Dzong houses Saddles and accessories belonging to Zhabdrung Ngawang Namgyel. It is believed that Zhabdrung Ngawang Namgyel.It is beleved that Zhabdrung in his journey to Bhutan from Tibet was accompanied by several protective deities. It is believed that six deities namely Pel-LegiGoenpo ,Pel-Yeshey Goenpa or Mahakala; Pelden Lhamo or Mahakali;Pel-Tsherngma, Goddess of longevity, Gye-Nyen and Gomo rode on the saddle , these saddled are also on display at Tashitongmon Dzong.

It is the only Fortress with three watch towers at strategic points. The Utse or the Central tower has the shrine of the local deity ApGomo.The beauty of the Dzong comes in full during clear days with a view of Mt. Gangboom. 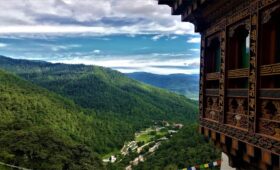 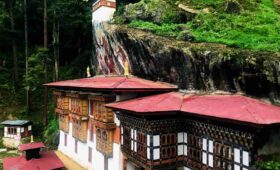 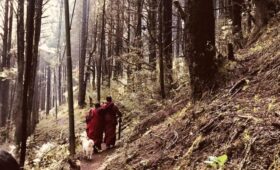