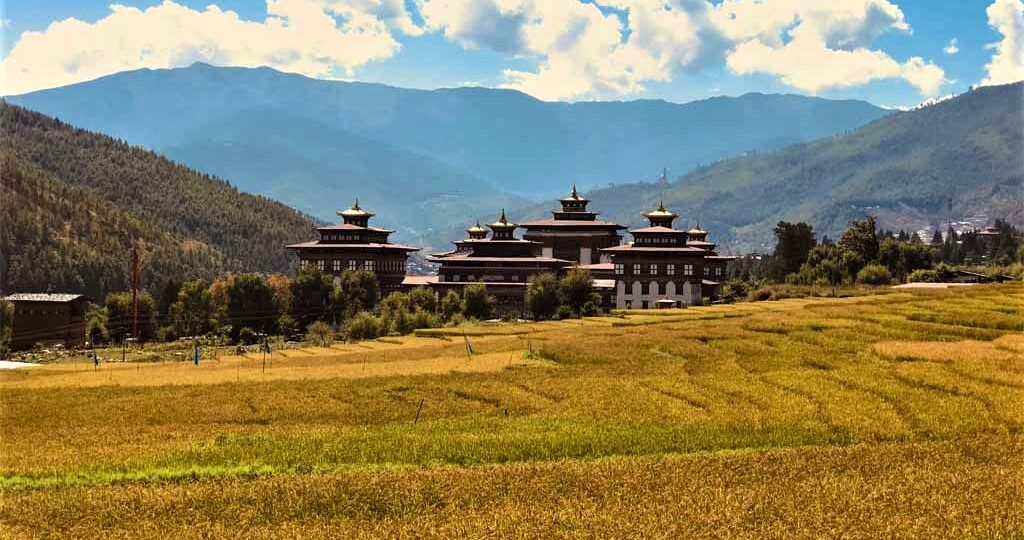 Bhutan is a verdant paradise with spectacular landscapes and magnificent architecture that is epitomized with Dzongs and Lhakhangs which stretch across the country. Thimphu is the capital of Bhutan; the only capital city in the world without a single traffic light, the valley is endowed with rich cultural heritage that goes back centuries and is still thriving.

Thimphu has abundant exciting places of attraction and sightseeing for one to discover. One can explore quiet beautiful hikes in and around the pristine forest, visit exquisite architectures, take a leisure walk in the busy Thimphu city, etc. So, on your travel to Bhutan – Thimphu; you can pick up any choice of your attraction from the list below.

Explore the exquisite massive structure of Tashichho Dzong in Thimphu, it is a masterpiece of Dzongs of Bhutan.

Set into the open courtyard and visit the Grand Kuenrey, the most splendid room of the Tashichho Dzong. The assembly of monks performs their daily prayers here in the Kuenrey before the enormous statue of the Buddha. 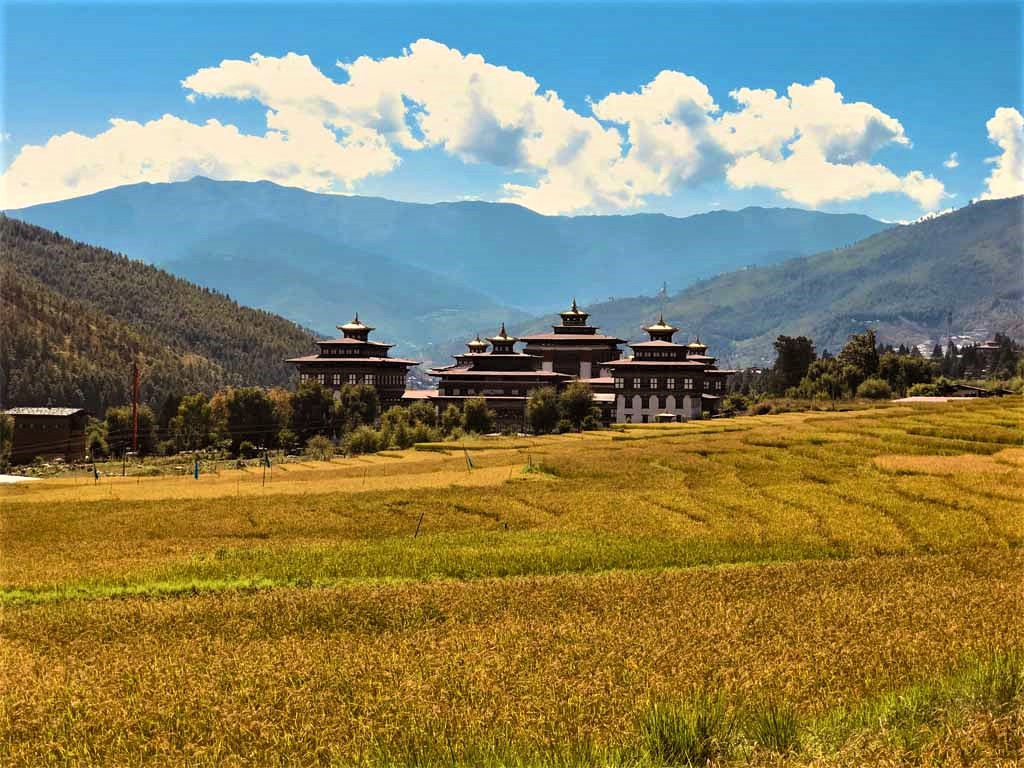 Drive up to the gigantic Buddha Dordenma statue (51.5 Meters) which sits overlooking the Thimphu valley. Besides the tranquility of the place, the view of Thimphu city is incredible. 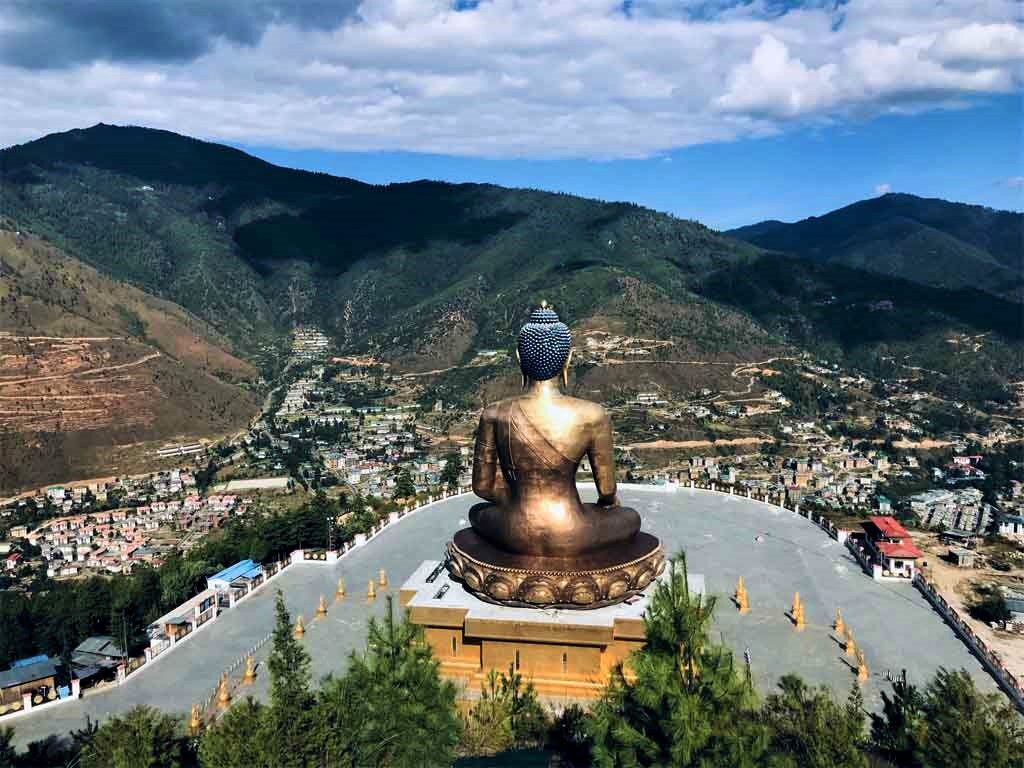 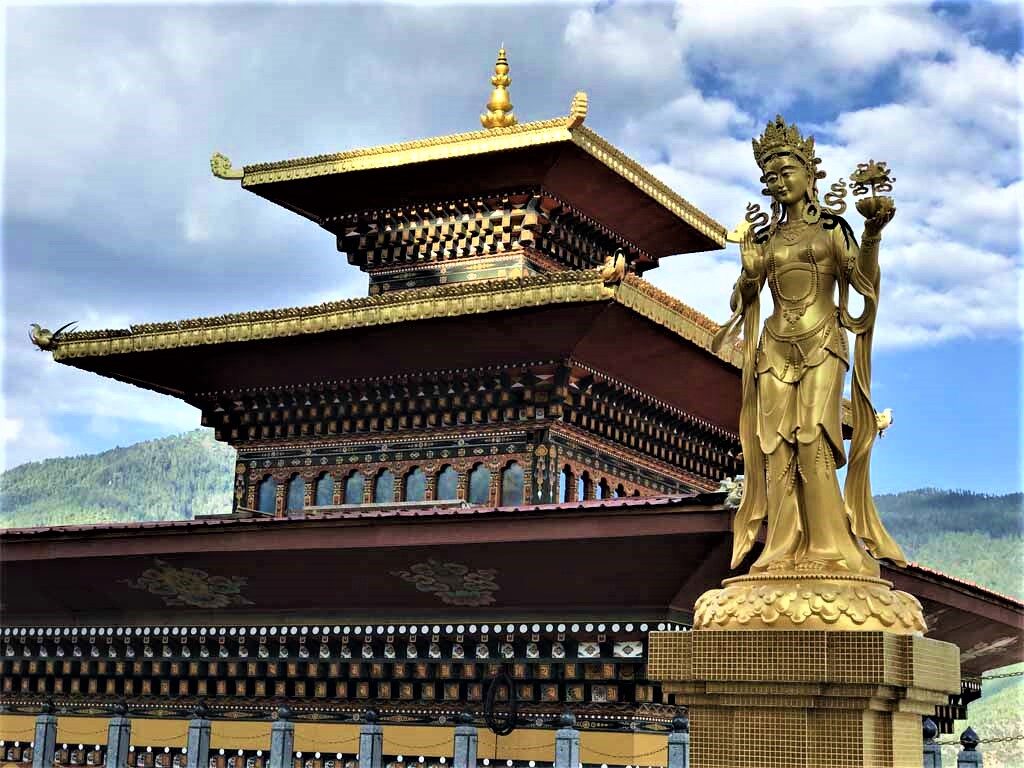 The National Memorial Chorten is a prominent landmark in Thimphu where you can see people from all walks of life gather to circumambulate the Chorten. The architecture and the statues of the Yidam Deities inside the stupa are incredible with profound spiritual meaning.

Located on a ridge overlooking the Chang valley (another name for Thimphu valley in the olden times), the Changangkha Lhakhang is an ancient temple founded in the 12th century by Lam Phajo Drugom Zhigpo. One can see devotees flock to this place to pray and chant mantras while circumambulating and spinning the Prayer wheels that surround the temple’s wall.

Located on a ridge separated by deep gorges; Simtokha Dzong stands strategically overlooking Thimphu valley and at the junction of the three provinces Sha, Pa and Wang (i.e. Wangduephodrang, Paro, and Thimphu). It is one of the oldest Dzong/fortress built by Zhabdrung Ngawang Namgyal in 1629 to unify the western part of Bhutan.

There are legends of malevolent forces being subdued on a huge rock at the place where the Dzong now stands. Thus, the name Simtokha has been derived from the word Simo-do-kha which literally translates as demoness on the rock.

The centenary Farmers Market is the largest domestic vegetable market where farmers from across the country gather to display and sell the local produce.  Located close to the Wang Chhu (Thimphu River), it is the busiest market in the country.

The Bhutan Postal Museum displays the evolution of the communications and postal system in Bhutan as early as the time when messages were delivered by messengers from Dzong to Dzong.

Visit the Dochula Pass located at 3,100 meters above sea level marked by colorful prayer flags and 108 concentrated Chortens (Buddhist Shrines). On a clear day, one can enjoy the panoramic view of the snow-capped peaks.

Chagri is a Buddhist Monastery that is located at the Northern end of Thimphu valley. One must take a 17 km drive from Thimphu town till you reach the end of the road at Dodena. From Dodena after crossing an old wooden cantilever bridge the Chagri hike starts which will take about 45 minutes till you reach the Chagri Monastery. The place has a tranquil energy field and often time you can see mountain goats mingling freely with the monks. This is a must-visit place if you love nature and peaceful places.

Bhutan Best Inbound Tour has vast experience as a premier Destination Management Company in Bhutan and has enabled many travelers to explore this wonder of Asia, creating an experience filled with adventure, discovery and authenticity. A landmark destination Bhutan is bursting with wonder. The rich Bhutan Culture , ancient walking trails and Himalayan trekking have been synonymous for centuries with Bhutan.
We excel in quality-driven and customized travel experiences for individual traveler and groups. The journeys we create are completely based on our client interests and schedule. Our team of holiday specialists are conversant in several languages and are passionate about creating memorable journeys and with our expertise and knowledge, we design journeys that are unique. With the latest technological advancements, we continue to look for better ways and means to meet/exceed the evolving needs and expectations of our clients and partners. Irrespective of your destination of interest or travelling style, we are committed to assisting you in getting your hands on the best deals.
The reason why our clients trust us is that we are recognized by the department of Tourism Council of Bhutan, Association of Bhutanese Tour Operators, and appreciated by various corporate and world tourists for offering impeccable services. We are rated No. 1 Tour Operator in the nation by Trip Advisor and branded as Excellent by Tour Radar. With inputs from our travel experts, our itineraries are crafted to fit every travel style, and we are flexible to further customize your journey of a lifetime in Bhutan. We have long-term associations with excellent hotels and resorts rendering our guests an amazing experience. The vehicles provided are all luxurious catering to the comforts of our guests as well as ensuring a smooth ride over the curvaceous mountainous terrain of Bhutan. And to top it off, our travel guides are simply lovable and have in-depth knowledge of Bhutan helping you experience the authentic Bhutan holiday. Bhutan would be fun travelling with us.