Royal Highlander Festival- The Dance of the Nomads 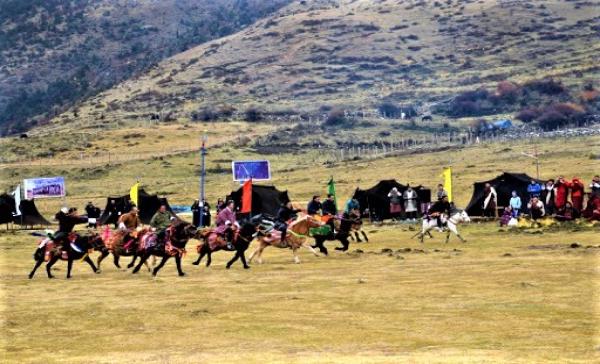 The Royal Highlander Festival is a two-day celebration for the nomadic people and their culture in the Northern part of Bhutan; located at a height of 3,800 meters. The festival was first started by the nomad residents of Laya for their distinctiveness; started by the fifth Bhutanese King- King Jigme Khesar Namgyel Wangchuck. The northern areas of mountainous Bhutan have the least of festival calendar and public/ tourist attention. The celebration is held at some of the accessible towns in the county. To give a solution to this, his highness, King Jigme brought to light on this festival to show their appreciation for such unrecognized citizens.

Visit Dra Karpo at Paro: Perched on a small hill top of Paro valley lies a small monastery ‘Dra Karpo ‘(split Rock), one of the holiest site in Bhutan. Guru Padmasambhava accompanied by his consort Dakini Yeshey Tshogyel and many other yogis and great master down the ages have blessed and sanctified the place. As you circumambulate you can see the foot and hand prints and many other auspicious signs and symbols believed to have manifested through some supernatural powers. Maybe owing to all these there is a mystique tranquility in the vicinity of Dra Karpo. It is believed that the demon took refuge inside the rock and Guru Rinpoche had Split the rock and subdued the demons. It is believed that even the deadliest of your sin will be washed away if you can circumambulate 108 times around Dra Karpo.

Evening free to explore Thimphu city on your own.

Overnight at hotel in Punakha.

Early Morning leave your hotel for your approx. 4 hours’ drive to Gasa and continue driving to Koina for another where the road ends, is your destination for tonight. Starting from end of the road, trek for approx. 4 and half hours, the trail first winds with a gradual descend till Koina and then winds up with a gradual climb till your camp site past the small bride (Thongchu zam). The Laya-Gasa Trek is considered as one of the most scenic treks in Bhutan, offering amazing views of some of the most pristine and unspoiled landscapes in Bhutan.

After breakfast, start trekking to your destination, the beautiful highland village of Laya. The trail winds up gradually and at times with steep climbs till you reach Laya. Early arrival to your camp and enjoy the scenic beauty of the landscape and then you will come across a lot of locals in their typical Laya costumes.

During the festival, visitors can witness The traditional offering of Buelwa (Gift offering) with Auley (traditional epic poem/song recitation tradition originated from Zhabdrung Rinpoche days) that begun during Zhabdrung Rinpoche’s reign in showing loyalty and respect by the community of Laya is being offered for dynamic and visionary leadership of our successive monarchs.

Variety of cultural programs will be performed by Layaps. Competition such as traditional songs and dances.

The various competitions on highland animals including the Yaks, horses and Mastiffs will be held.

The festival consists of series of stalls ranging from local based yak produce to highland technology, highland agriculture technology, medicinal herbs & plants and others. You can do some filming here as well

Later we will explore Laya valley, one of the most remote place in the planet. The whole settlement has about 110 houses. The people of Laya have their own dialect, customs and distinct dress. The women keep their hair long and wear conical bamboo hats with spike at the top. Cordyceps sinesis which is an insect parasite fungus having high commercial demand due to its high medicinal value is also found here.

Overnight at Camp at Laya

Trace your way back to Thongchu Zam on Day. Even while on trek we can capture some beautiful sceneries, people, etc.

After the trek, soak yourself in the natural hot spring of Gasa to rejuvenate yourself, the water temperature varies in each of the pool with different medicinal value, you can choose according to their choices. People believe that the hot spring/ Tsachu has curative effects with 128 varieties of medicines and minerals.

Overnight at camp at Gasa.

After the hike you can just relax and enjoy the scenic beauty and the tranquility of Gangtey valley.

Overnight at your Hotel in Phobjikha/Gangtey

In the morning visit Gangtey Monastery:

Later, drive to Bumthang via Pele – La Pass (3300m). This pass is traditionally considered the boundary between western and eastern Bhutan. Further down the road, you will see Chendebji Chorten (Nepalese styled Stupa).

On arrival at Trongsa, visit Trongsa Dzong, the most impressive Dzong in the kingdom. It was built in 1644 by Chogyel Minjur Tenpa, the official who was sent by the Shabdrung Ngawang Namgyal to unify eastern Bhutan. After lunch, visit Ta Dzong (watchtower) on the hillside above the town, dedicated to the epic hero, King Gesar of Ling and continue your journey to Bumthang en-route cross Yutong-la pass (3,400m). The road winds steeply up to the pass and then runs down through coniferous forest into a wide, open, cultivated valley known as the Chumey valley and then finally to Bumthang.

Overnight at Hotel in Bumthang

Bumthang is the general name given to a group of four valleys – Chumey, Choekhor, Tang and URA, with altitudes varying from 2,600 to 4,000m (8,530-13,125ft). This area is home to many ancient Buddhist temples and monasteries.

Overnight at Hotel in Bumthang

Day 11: Fly From Bumthang To Paro

The flight takes about half an hour. However, if you have time we can drive back which may take about 10-12 hours

It is a beautiful valley located in Western Bhutan with an area of 2800 Sq. Kms. Breathtaking Lhakhangs and monasteries are perched on mountain hills. Two sacred rivers with its respective source at Jumolhari and Chumo Phug Mountains, makes their way through Paro valley enhancing its beauty and grandeur

Today you will be hiking to one of the famous sites called as the Tiger’s Nest (Taktshang) perched at 900m above the Paro valley. It is a pilgrimage site which the Bhutanese try to visit at least once in a lifetime. It is believed that Guru Rinpoche flew on the back of a tigress from eastern Bhutan to this site and meditated in a cave here for 3 months, hence its name, ‘Tiger’s Nest’. The site, which has long been regarded as the sacred place, was visited by Shabdrung Ngawang Namgyel in the 17th century approximately in 1646. The Lhakhang of the present monastic complex dates from 1692. The main structure was severely damaged by fire in 1998, but with the help of the local people and the government it has been put back to its glory. The hike can be broken down into various stages.

The first stage is the trek to the cafeteria (where lunch will be served later today) which is situated on a rocky outcrop across a ravine from the monastery. This leg of the trek takes approximately 45 minutes to 60 minutes, depending on your level of fitness. At the Cafeteria we can stop for some tea or coffee and biscuits whilst pondering the journey ahead and looking at the monastery I the distance above us.

The 2nd stage of the walk is from the cafeteria to the lookout opposite of the monastery. This leg takes close to one hour.

At this point some may be content to snap photos and return to cafeteria.

The next stage is the trek/climb down the 475 steps in the cliff face to the bottom of the ravine which crosses over a stream and a waterfall before the path again ascends another 300 odd steps to the entrance of the monastery. Once here we should be able to enter into the monastery and view the cave where Guru Rinpoche meditated. (Cameras are not allowed inside the monastery).

Bhutan Inbound Team will drop you all till Airport & bid you farewell.