Bhutan is a mesmerizing country with high mountains and lush green topology. With newly constructed roads and bridges, now the transport runs on well-developed networks. The major motorway runs west-east with other connecting roads that link to the southern border, making the northern portion of the nation and many other sections of the country only accessible by hike. Bhutan Best Inbound Tour’s drivers are all certified & well-versed in their homeland. They are cautious drivers. On most roadways, traffic density is typically modest.

Bhutan is a landlocked nation with a terrain dominated by steep mountains and hills. As a result, sea transportation and train travel are no longer viable options to cover the Bhutan Distance. Domestic flights have begun to operate between Paro (Western Bhutan) and Bumthang (Central Bhutan) to Gelephu (Mid-South), to Yonphula (Eastern Bhutan) to cover the Bhutan Distance.

The major means of transportation, however, is via road. Despite its high mountains, steep slopes, and deepest valleys, the country has a well-developed road network that overcomes the Bhutan Distance. However, it is unusual to come across a stretch of road that is both straight and flat. Some segments include as many as six to seven turns every kilometer! Road travel in Bhutan is marked by steep ascents and descents, as well as twisting and narrow roads, which can make travel considerably slower than one might expect. The average speed for road travel is roughly 45 kilometers per hour, although the pace is slower due to the many pauses made by tourist vehicles. The breathtaking vistas of towering mountains, lush green jungle, old towns, and beautiful monasteries compensate amply for the lengthy and often exhausting vehicle drive. 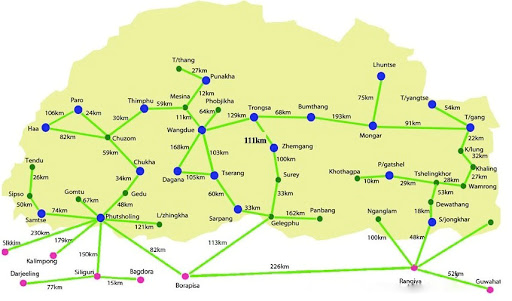