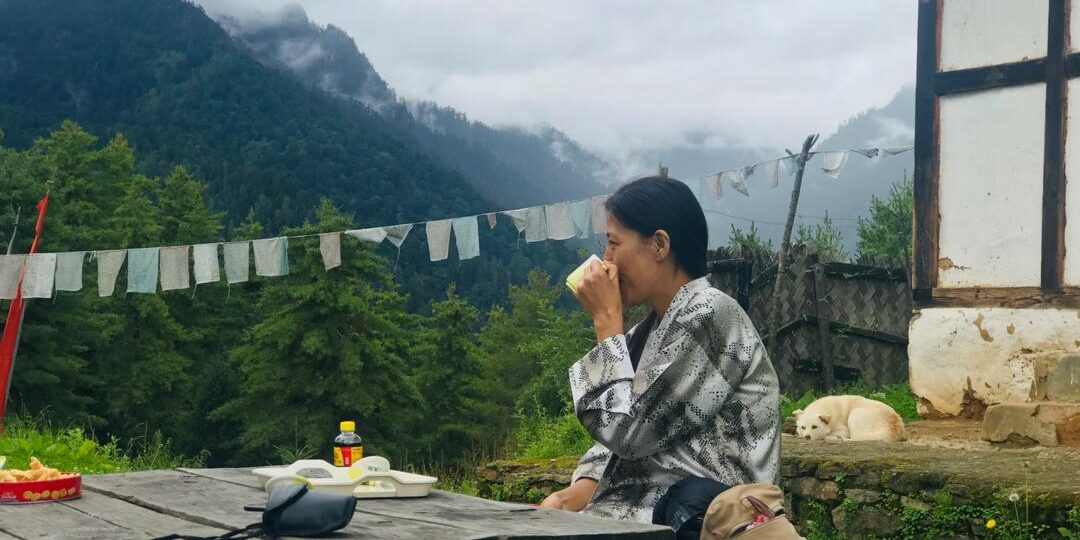 Bhutan is a sacred land with deeply spiritual people. There are 10,000 stupas temples and more than 2000 monasteries. Some are National treasures like the Tiger Nest. The are hermitages which are a marvel to see. So while in Bhutan, you should at least take time to visit the temple on the mountain top.

Chokhortse is one such temple on the mountain of Bhutan. It is within an easy reach of  an hour’s walk but isolated and less touristy.

From BBS tower, Sangaygang, you have an option to take two short hikes, one leading to Wangditse monastery and the other to Chhokhortse Monastery. If you want to take the easier route you can take a hike to Wangditse Monastery, for more information on Wangditse hike, you can read our following blog

Well if you want some excitement to your hike then you can opt for hike to Chhokhortse.

As you begin your hike you will be ushered by thousands of prayer flag. The hike is pretty steep, sporadically you may have to ascend to the gradient of 60 to 70 degrees. But there are benches where you can take a rest and enjoy the spectacular view of Thimphu valley.

We took this hike somewhere on August. We also met lot of mushroom collector on our way. It was a pleasant sight to see them singing and hunting for the mushroom playfully till we lost their sight to a denser forest. We also met some women who had come to collect some herbal plants.

As you hike through the tapestry of Bhutanese colors you will be welcomed by  butterflies, bees, wild flower, berries and rhododendrons.

Just five minute walk from Lungta-phodrang is Chhokhortse which in contrast to Lungtaphodrang is old, traditional and customary. It is located on a hill top with the silhouette of hundred other mountains at the back-ground . I believe if we continue following this trail further we will reach Thuji Dra or popularly called as Phajoding goemba.

The temple caretaker plus a Buddhist practitioner was a pleasant man with a beautiful smile and good vibe. He welcomed uskindheartedly and also gave us the brief explanation of the Lhakhang

A Brief History on Lhakhang: Jamyang Kuenga Singye founded this place in the year 1345. It was a private temple. But over the generation the temple was neglected and there was no one to take care of it and that is when local people decided to offer to our king.

The famous antique here is statue of Sakyamuni Buddha which is believed to have spoken, Vajra Kyilaya Dagger of Lam Jamyang Kuenga Singye & relic of Buddha Sakyamuni which is offered to the temple by present king and queen. The local protective deity of this place are Dorji Draktsen & Tsheringma.

After detouring the Lhakhang , the Tshampa offered us a hot cup of tea . He is highly knowledgeable on Buddhist philosophy and we also had some discussion on Buddhism.

While returning back the hike was easy as it was all downhill.