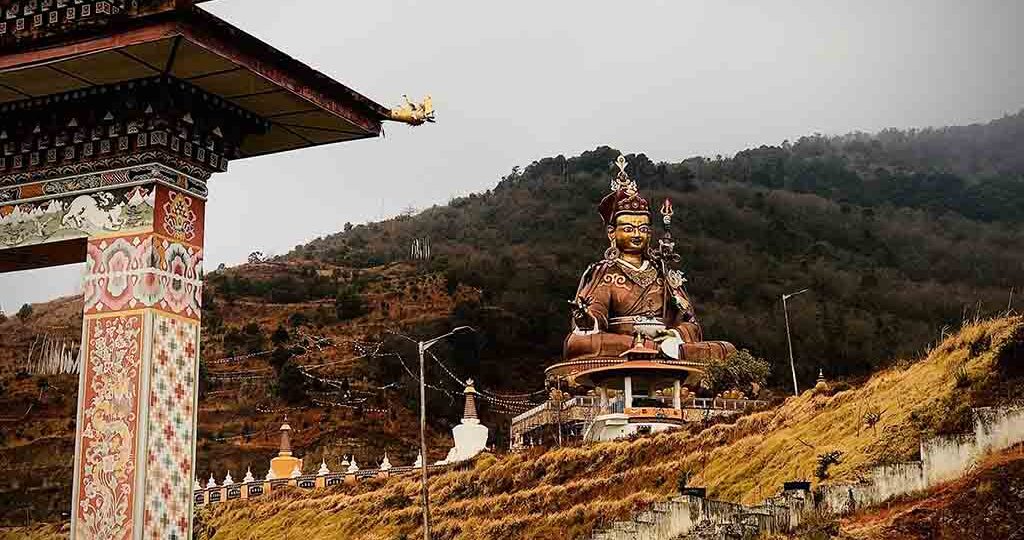 Lhuentse, where the river runs green. Located in the north-eastern flanks of Bhutan, Lhuentse rich past seamlessly blends with its present. Its cultural landscape and historical monuments offer a glimpse into two world that co-exist in spiritual harmony. Visit Khoma village, Takila Guru Statue , Lhuentse Dzong and enjoy the tranquility of the place.

The second place that was in my list of off beaten path was Lhuentse, another isolated district in Eastern Bhutan . It  is located about 77 Km / 3 hours’ drive from Mongar.

Trust me even many a Bhutanese have not reached this place owing to the long traveling distance and there is nothing much to do here. But this is what exactly what I wanted to do . Nothing, just wanted to be in tune with the palpating heartbeat of the nature in its silence.

And my eagerness to go there was boosted by the news that Je-Khenpo is going to reside there on 2019 winter. So thought if I am lucky, I may get a personal audience which otherwise would be difficult here in Thimphu.

And thus my journey began with my travel companion with same taste and pace.

Journey to Lhuentse From Thimphu

If you are planning to visit to Lhuntse from Thimphu or Paro, it will take minimum of two nights on road as it is located in the northeastern corner of Bhutan. But for us journey is more fun than destiny so took triple the time. Before reaching Lhuntse , stopped at Gangtey Valley which is perhaps scenically one of the most beautiful valley in Bhutan and its beauty is enhanced by the coming of majestic Black Necked Crane in winter.

Stayed another two nights in Bumthang and visited the valley of Tang, Maebar Tsho(The Burning Lake), Ta Rimoche which I had missed out in my last visit to Bumthang.

And on 5th night, we were there at Yonkola (The Birder Paradise) about 30Km away from Mongar and chose to hold night at Trogon Villa rather than in midst of Mongar Town.

And finally on sixth day we were heading for Lhuntse.

This ancient region of Kurtoe or Lhuntse is the ancestral home of our kings and prides itself of hosting multiple sacred sites of pilgrimage. Culture-driven conservation has endured here.

The landscape is spectacular with stark cliffs towering above river gorges and dense coniferous forests.

In our whole journey from Mongar to Lhuentse we just encountered one car. It was like traveling back in time.

The place is so secluded that there is not even a single 3* hotel here. So we had a choice either to stay in a budget hotel or home stay or at a Monastery. And for a change me and my travel companion chose to stay in monastery whose In-Charge we were well acquainted with; and it was perhaps one of the highlights of this tour.

We stayed at Dudzom monastery, which sat precariously on mountain top, standing there you can just feel you can kiss the sky.

In the morning and evening we sat with the little monks and joined them in their prayers.

Khandrola Damchoe (Recognized as the reincarnation of some great saints) was also residing there. She was another amazing woman that we encountered in this journey. She was recognized as Khandrola after her graduation and her presence was mesmerizing . It was amazing to watch how people stay so contend with simple things.

Places to visit in Lhuentse Bhutan

From trekking in the serene wilderness, exploring the colorful handwoven textiles and learning the craft of pottery, there are many things to do on Lhuentse. You can also take a dip in natural hot springs. The idyllic Lhuentse offers an experience that is both surreal and exuberating.

It is  famous for its weavers and their distinctive textiles are generally considered to be the best in the country. Kurtoep women are especially adept at weaving a textile called Kishuthara. Khoma village is the epi center of Bhutan’s textile weaving tradition.

Ganjur village is around 10 minute drive from Lhuentse Dzong. It is a vibrant community where local artisans still keep alive the dying art of pottery. But due to urban migration, there are only few family engaged in pottery now.

Currently open only to locals, Singye Dzong or the Lion Fortress is one of the most sacred places in Bhutan. Located within the Bumdeling wildlife Sanctuary and close to Tibetan border; it takes three days to reach Singye Dzong from Khoma Village.

The sacred Khempajong Tshachu ( hot spring) is one of the remotest hot springs in Bhutan. Without road connectivity , it takes 4 hour walk to reach the hot spring from Jatsabee village.

Places to visit in Lhuentse Bhutan

Some of the top places to visit in Lhuentse Bhutan includes:

This majestic fortress known as Lhundup Rinchentse Dzong is perched on a ridge overlooking the Kurichhu  river. It was constructed in 1654 by Trongsa Penlop Chogyal Minjur Tenpa on the site of the older temple built by Nagi Wangchuk in 1552. It houses many sacred artifacts that was installed by 4th Druk Desi Tenzin Rabgay.

The house of Dungkar, one of the noble lineages from Kurtoed, was home to Trongsa Penlop, the father of Wangchuck Dynasty. It stands amid a scenic backdrop of towering mountains overlooking the tiny Dungkar village. A 40Km dirt road fromLhuentse leads up to the Dungkar Lhakhang.

The 173ft tall statue of Guru Padmasambhava stands imposingly on the slopes of Takila, overlooking the the scenic valley of Tangmachhu. The statue was built by late venerable Khenpo Karpo Rinpoche.

The tiny village of Kilung is a 20 minute drive from Lhuentse Dzong  Kilung Lhakhang is situated on a ridge overlooking the Kurichu (river). It was built on the former site of Kilung Gyalpo, a regional chieftain. The temple houses the sacred chain mall that was believed to have been used to recapture a statue that miraculously flew away from Lhuentse Dzong.

Places to Stay in Lhuentse

There are no proper tourist standard hotels in Lhuentse. However there are number of farmhouses and homestaythat provide accommodation services with authentic local hospitality. Villagers are friendly and welcoming. They treat guests to tshogchhang , a traditional way of welcoming guests with Ara (local alcohol) accompanied by singing & dancig. Homestay offers a truly organic experience of traditional hospitality.

Well, the most of Lhuntse district is  part of the environmentally protected areas of Bhutan. The district contains parts of Wangchuck Centennial Park in the north, Thrumshingla National Park in the south and Bumdeling Wildlife Sanctuary in the east. These three parks are connected by biological corridors that crisscross the central and southern regions of the district.

We also could get the personal audience from Je-Khenpo, another best part of the tour. And got a golden opportunity to have a meal at His Holiness parent’s house.

So all in one had an amazing experience and yes ‘Happiness is a Place’.

If you want to visit the Eastern Bhutan , you can contact Bhutan Best Inbound Tour.