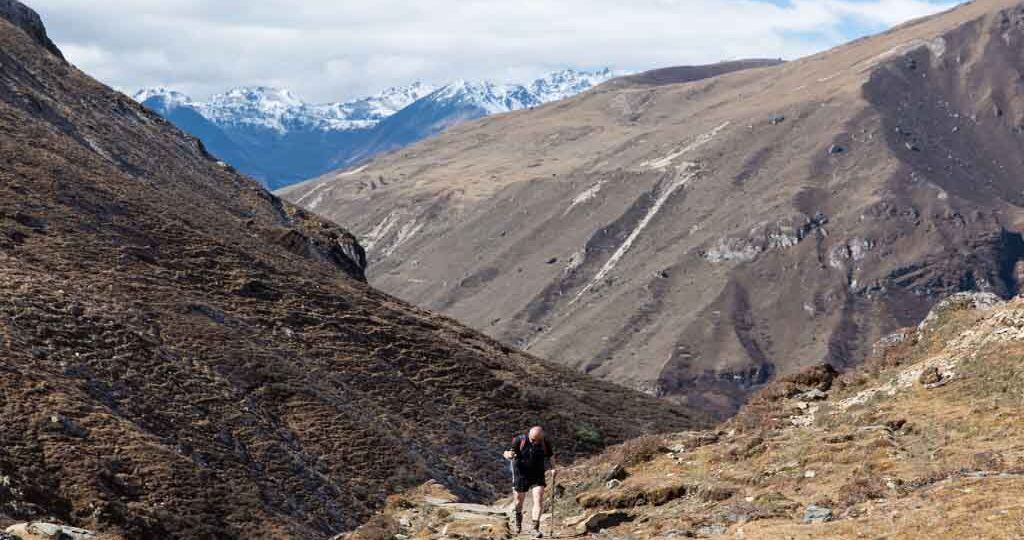 Dagala Thousand Lakes Trek is one of the most scenic treks in Bhutan. It offers breathtaking views of snow -capped peaks, stunning landscape, and traditional Nomadic Lifestyle. 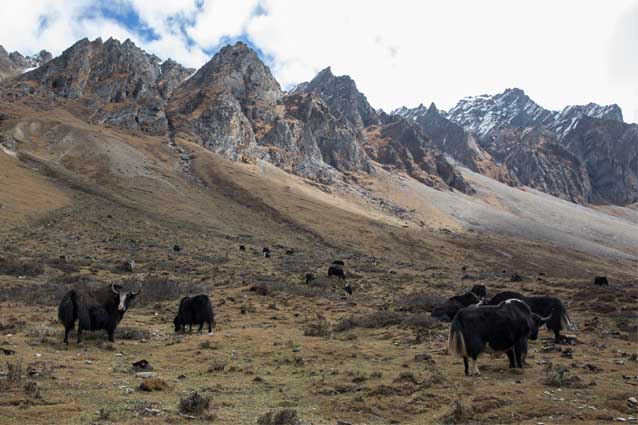 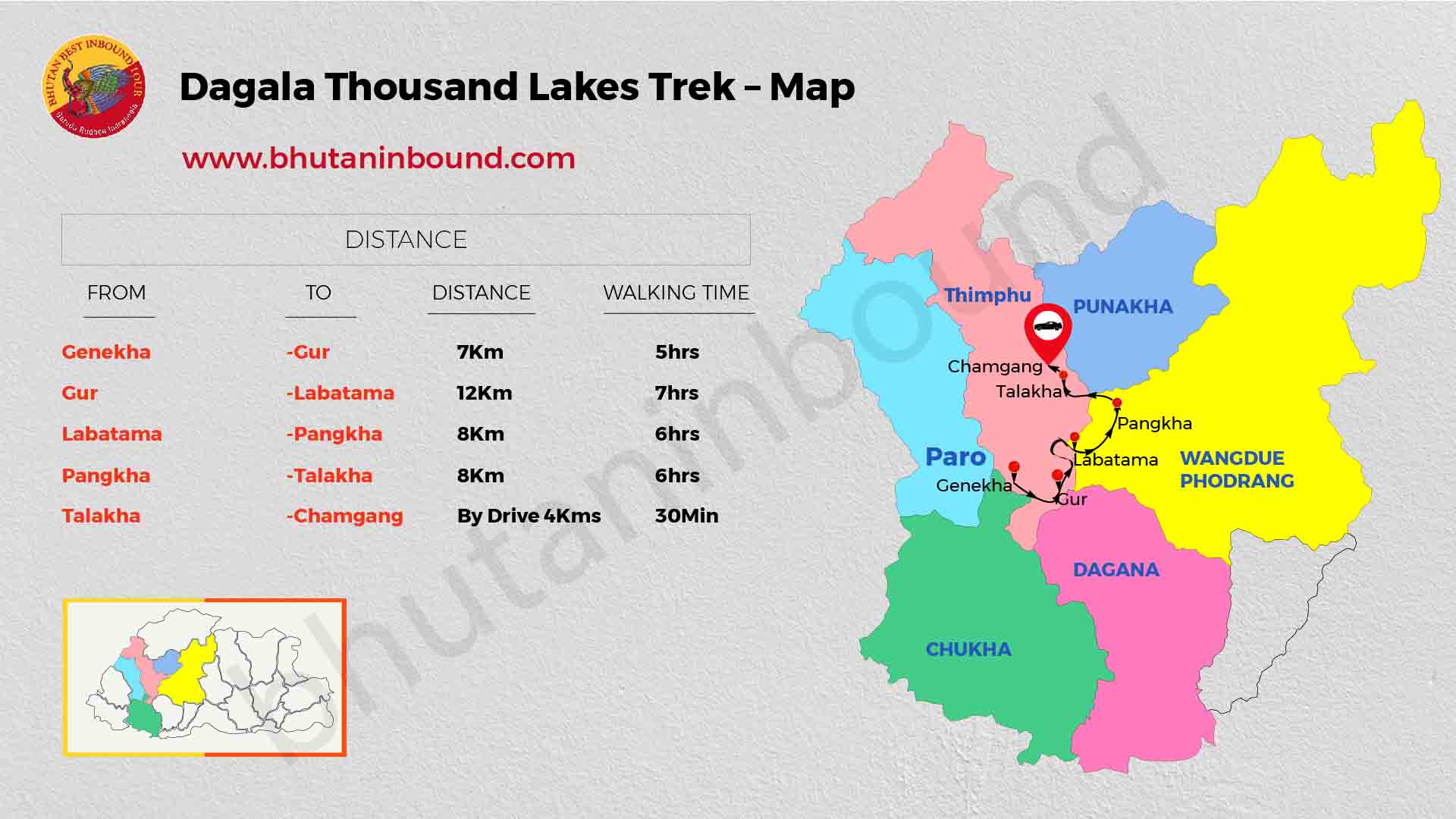 Dagala Thousand Lakes Trek  is for mountain lovers and this blog is dedicated to them.

A Bhutanese oral saying, even the Nomads who are raised in Dagala pasture just can’t master this trek route. The reason is that, myriads of paths lead to these valleys and if you lose the path you will be lost in the maze. However you will be accompanied by Trekking guide so there is nothing to worry.

It offers  the most beautiful views of the world’s highest mountain including Mount Everest , Mount Kanchenjunga and other Eastern Himalayas. The trek route was used by Daga Penlop in the olden time to visit Punakha . Punakha was then the capital of Bhutan. It is one of the most Scenic Trekking in Bhutan. 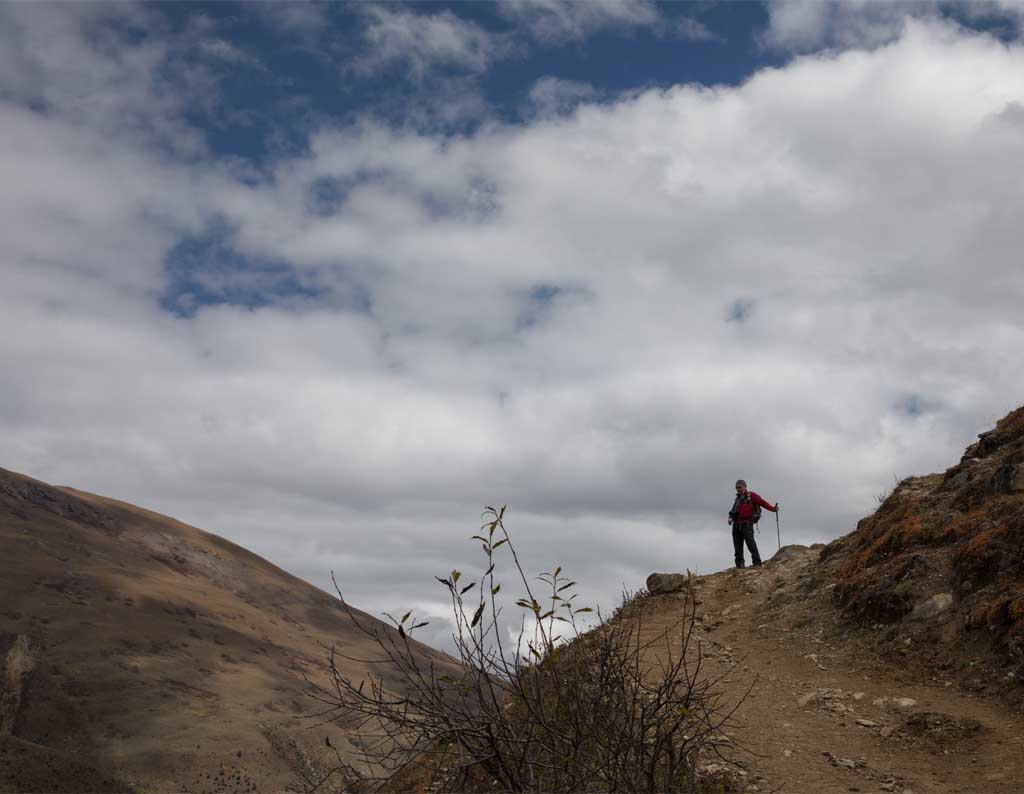 Most people claim that this trek is an easy trek, but ironically it is a high altitude trek and requires a lot of stamina. The campsite ranges from 3200 meters to 4200 meter. As you move through this trek you have to cross many passes above 4000 meters. However the view of crystal clear lakes and Eastern Himalayas is simply of another world.

The trail also takes you through several Bhutanese villages, so you can get a good idea of the traditional Bhutanese lifestyle.

The Trek starts from the most beautiful village of Genekha ( 2750 meters) . The starting point of the trek is a susspension bridge at the foot of Genekha village.

From here, we  follow the ancient trails followed by  Daga Penlop and his retinue in olden time.  We have to walk through the evergreen  forest of Blue Pine and Conifer till we reach the subalpine Zone,  called Gur, situated at an altitude of 3200m. We can have our campsite set at Gur Valley. There is a beautiful  forest below the Gur campsite . It is famous for the most expensive mushroom known as Masutake. If you are up to some adventure then we can  hunt for Matsutake mushrooms in the evening.

However you can also have the option to  camp at Watasachen instead of Gur, if the altitude is not a problem for you. Watasachen  is at an altitude of 4150m.

Once at the Camp at Watasachen,  you can explore the village and lifestyle  of nomads of Dagala.  Though they live above 4000 meters, they stay clean, perhaps the cleanest nomads in Bhutan. Thanks to the support from UNDP for helping the Nomads with clean toilets, metal roof, solar panel and Gas Stove for cooking.

From the village of Nomads, if you hike another 20 to 30 minutes you can get a stunning view of Nychen Dongkola ,Kanchenjunga and the Phodrang/Palace of Aum Jumo of Dagala.

The next day we can explore the Lakes (Tsho)  of Aum Jumo . Aum Jomo is the deity of Jomolhari  Mountain . The Lakes like, Yue – Tsho, Tsha-tsho, Thro Tsho, Bay Tsho, Dagay tsho, Bjagay Tsho, Jumo Latsho, Ser tsho,  is called as the procession of Aum Jumo . You may visit the meditation cave  in the small island of Bjaytsho Lake and feel the presence of divine mystic.

You can also check out the ruins of Daga Penlop Auchu Tshering’s at Labatama  known as Dophu Tshawa in between two small streams.

We will stop for Lunch at Taju la at 4350 meters. There is a story of how the name Taju La came about which means ‘Horse Race Pass”

Daga Penlop  Auchu Tshering married a Girl who indeed was a manifestation of Aum Jumo. Two of them used to love watching the horse race . So at Taju la, they used to make their subjects compete in horse races. Ta- Horse Ju- Race and La- pass; this is how the name came about. 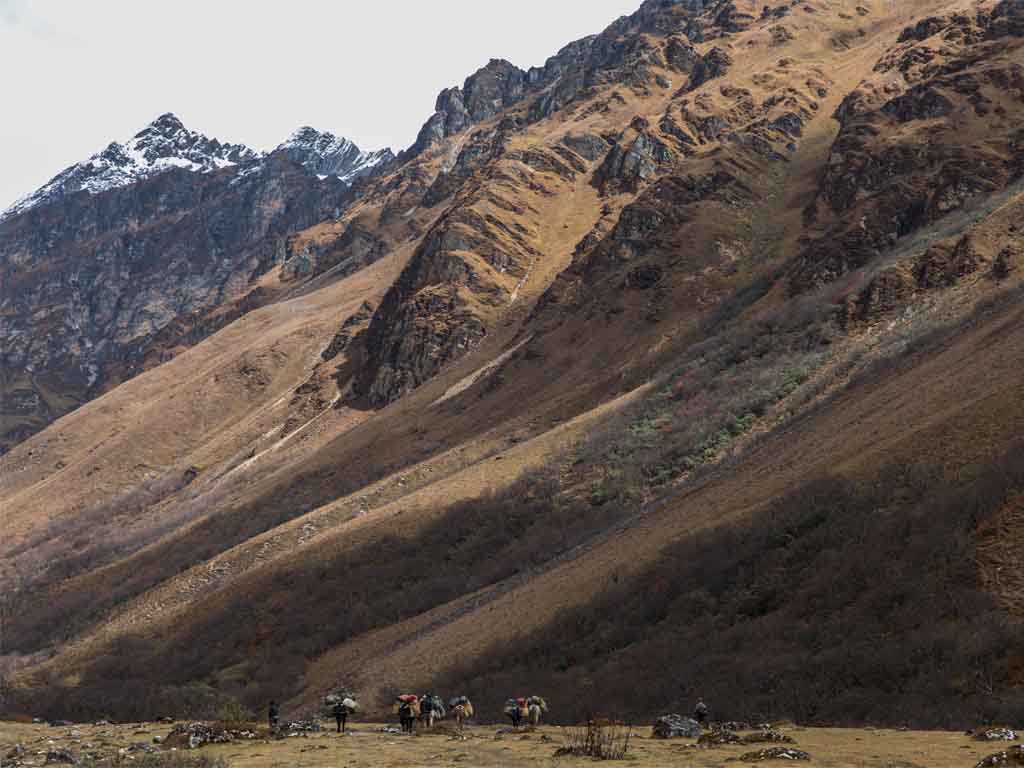 The campsite will be just below the Taju la pass from where we can get the magnificent views of Jomolhari, Mount Kanchenjunga and  Jichu Drake, Tsheringmeigang. The beauty of these mountains is further enhanced during sunset.

After having a good breakfast, we can ascend to another pass known as Labagay. It is the highest point on this Trek  at 4450 meters.

From this pass if you climb another 100 meters up then you will be able to see Mount Everest, Mount Kanchenjunga,  Mount Lhotshe and the last Himalayas in Bhutan including Gangkhar Punsum at the far end. 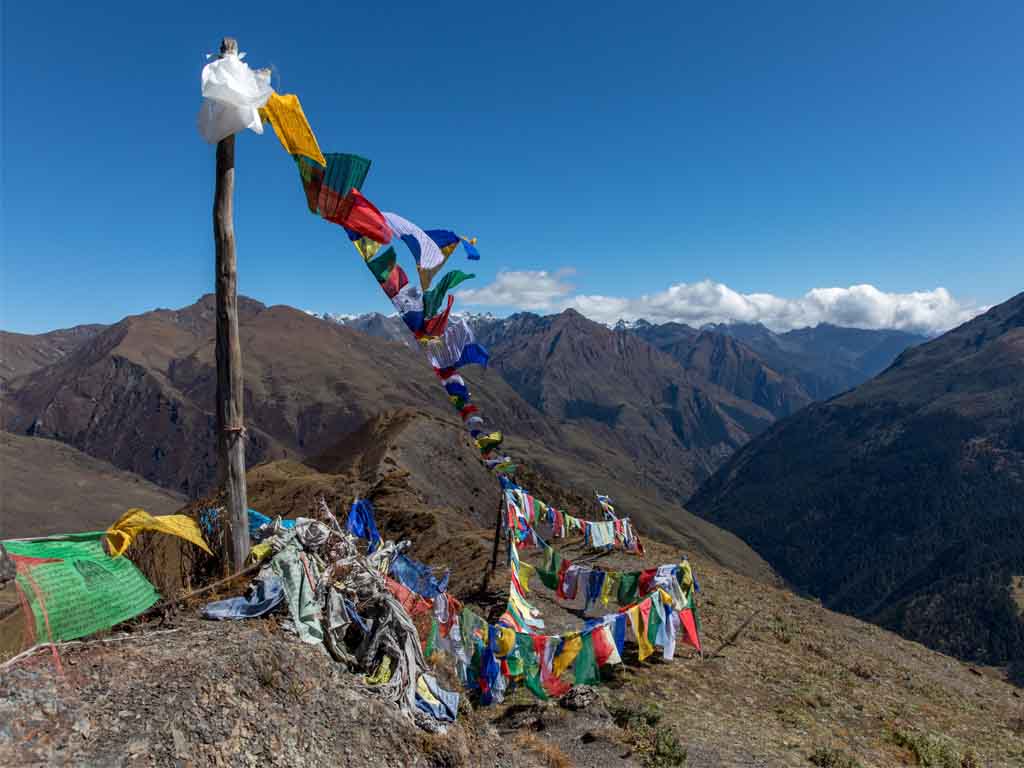 Here we can really coexist with the sky, Mountains, Lakes and rivers. One can get the feeling of being on the top of the world.

After crossing the Labagay pass, we slowly descend down on the stony path that had been used by Daga Penlops while going to Punakha. This is the historic route which passes by the lake known as Dungkhar Tsho . The last lake on the Trek.

We also come across a very beautiful Nomad pasture  known as Laba Chung with the Yaks grazing.

If you happen to come in spring, this place looks like a Botanical Garden. The walk through the shrubs of Rhododendrons Anogosium will lead you to the bridge. After crossing the bridge, we will ascend slowly towards Pangka Camp 4000 meters. The walk is so lovely that people forget to walk at their own pace as they fall in love with flowers. Once, one of my friends told me, we have to be like Flowers,  they never try to compare their beauty with one another.

Pangka is one of the most beautiful campsites in this Dagala Trek . From here we can have a good View of the mountain starting from Sikkim to the Last Himalayas.

If you like we can take a day off and immerse ourselves in the scenic beauty of the Mountain.

After a good breakfast we will take a walk from Pangka campsite. The walk  gradually ascends to the nameless pass with the best views of the Himalayas. Then descends down to a place known as Zorina and further  ascends to the Chari la Pass ( RainCoat Pass 4200 meters) . Chari la is a beautiful pass, from where you will be able to see the whole mountains of the world. You can also see many species of mountain birds on this trek.

If we are here in the right season, we may see the Blue Poppies and Yellow Poppies on the way up.

In olden times it is said that the strongest Soldier of Daga Penlop had to carry the stone from  Zorina to Chari la. So as to prove their worth.

The walk gradually descends towards another Nomadic place known as Kherkewa.

And from here we slowly ascend and descend to Gechula at 3850 meters and head towards Jeley Zey.

Once on top of Jeley Zey, you will not want to descend down. The sunrise and sunset will be the most beautiful from this point.

Slowly we will descend down to Pangserbu. We bid goodbye to Mount Kanchenjunga, who has been like a guiding star from the starting day of the Trek.

The walk down hill is more enjoyable. We  have to walk through the forest of Dead Trees and the Conifer Forest. At the end of the forest , we will bypass a logging farm road and then enter into a forest of pine trees.

Then slowly you will be Greeted by the small monks who are getting trained at 3000 meters under the strict Guidance of their respectable Teachers.

After making a visit to the Talakha Monastery,  and thanking the Guidance Deity ( Tshangkhap Jeley, for taking care of you and your teams and after getting a blessing from the old Kanjure printed from on Daphne plant,  we bid an Adieu to the Trek of 1000 lakes, sometimes knowns as Walking in the steps of Daga Penlop. 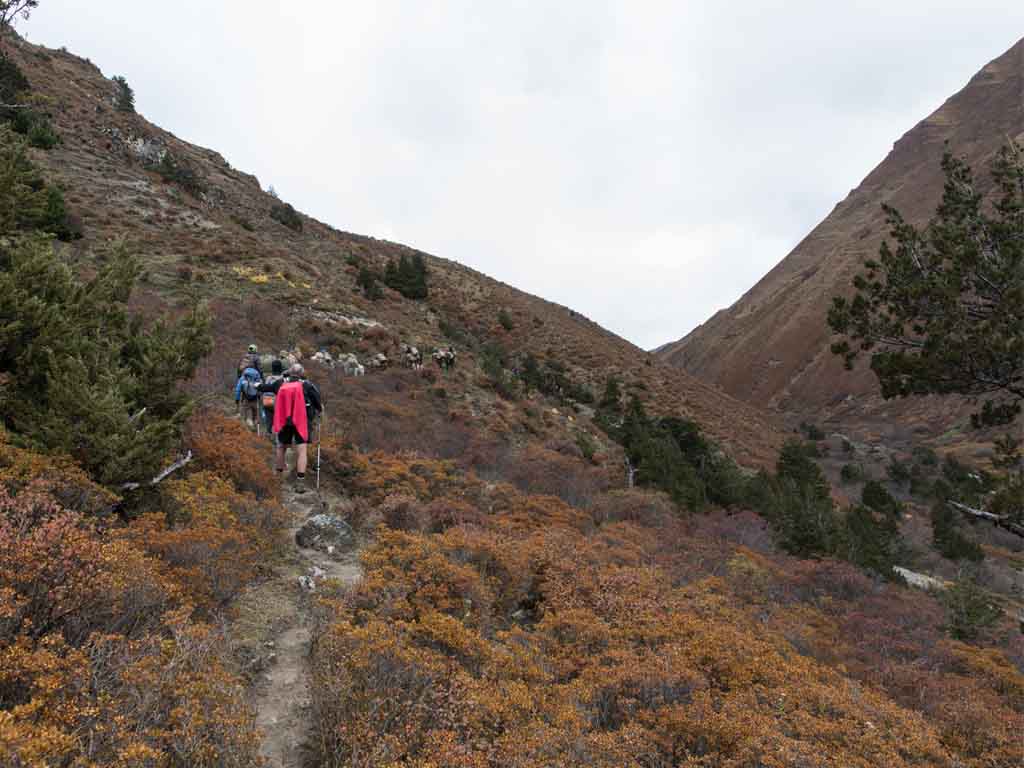 Other Highlights of Dagala Thousand Lakes Trek  in Bhutan

Dagala Thousand Lakes Trek is highly recommended for travel photographers, nature lovers and trekkers who want to seek something out of ordinary.

Bhutan Best Inbound Tour is a Bhutan Travel company and is a registered Bhutan Tour operators company under the umbrella of the Tourism Council of Bhutan. We handle all kinds of travel arrangements including Bhutan Visa, Bhutan Flight, Bhutan Itinerary design and Hotel booking. With a belief in quality and services, Bhutan Inbound is a reliable and efficient travel organizer in Bhutan for foreign and domestic tourists, business travelers, special interest visitors and events.
Our professionals toil hard to achieve complete client satisfaction through their par-excellence knowledge and experience.
Some of the most popular package that we offer are
1.Cultural Tour Package
2.Bhutan Festival Package
3.Family Friendly Tours
4.Bhutan Trekking
5.Off The Beaten Path
6.Luxury Tours

Check Our Other Blogs