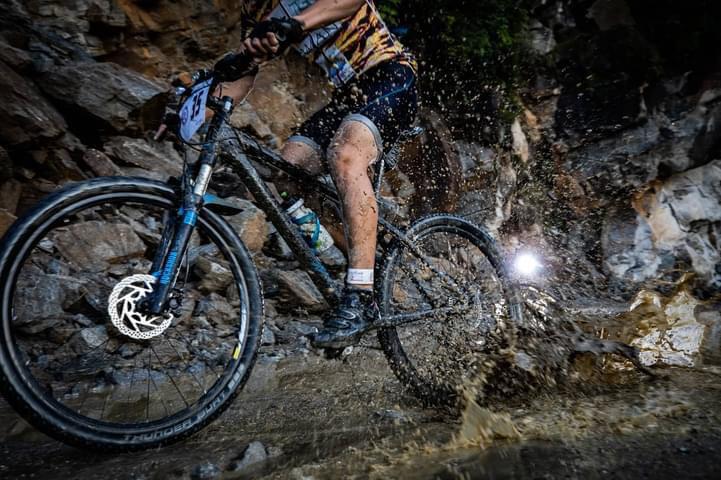 Medieval Bhutan is said to have been a time of mystery when mountain trails and passes were haunted by flesh-devouring ghosts and demons. It was also a time of saviors and supremely empowered men like the celebrated 15th-century mystic and saint, Drukpa Kuenley.  He put his power to the test against the forces of evil. The high mountain pass of Dochula was once such a spot where  such an epic battle commenced. It was from here that Drukpa Kuenley, also known as the Divine Madman, baited and chased a powerful demon till Chimi Lhakhang ( The Divine Madman Temple in Bhutan) . The trail from where the chase began and ended is called as the Divine Madman Trail.

About The Divine Madman

Drukpa Kuenley the Divine Madman of Bhutan is remembered for the outrageous nature of his teachings. He is often administered in startling ways, with strong sexual overtones. His use of his magic ‘thunderbolt’ to teach & subdue evil makes him remembered with much fondness as an eccentric saint. 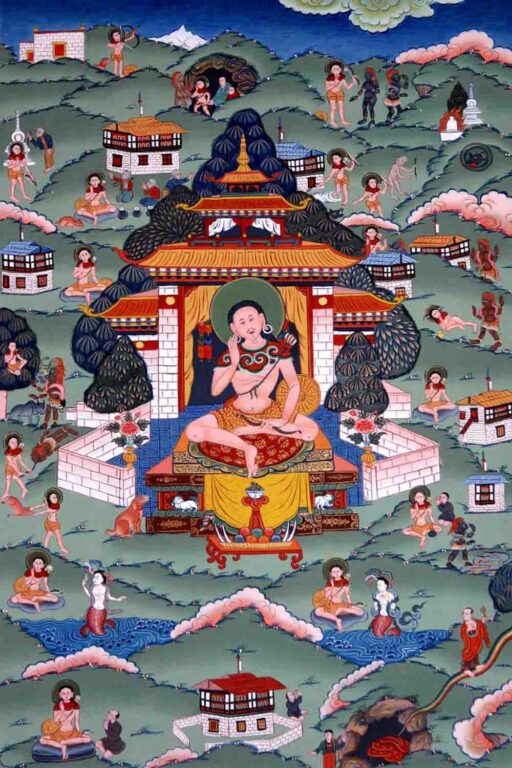 Today, you too can retrace the steps of Drukpa Kuenley on his chase of the demon from Dochula to Chimi Lhakhang ( The Divine Madman Temple in Bhutan). The distance of 21 km that has only recently been developed into an Eco-tourism trail. 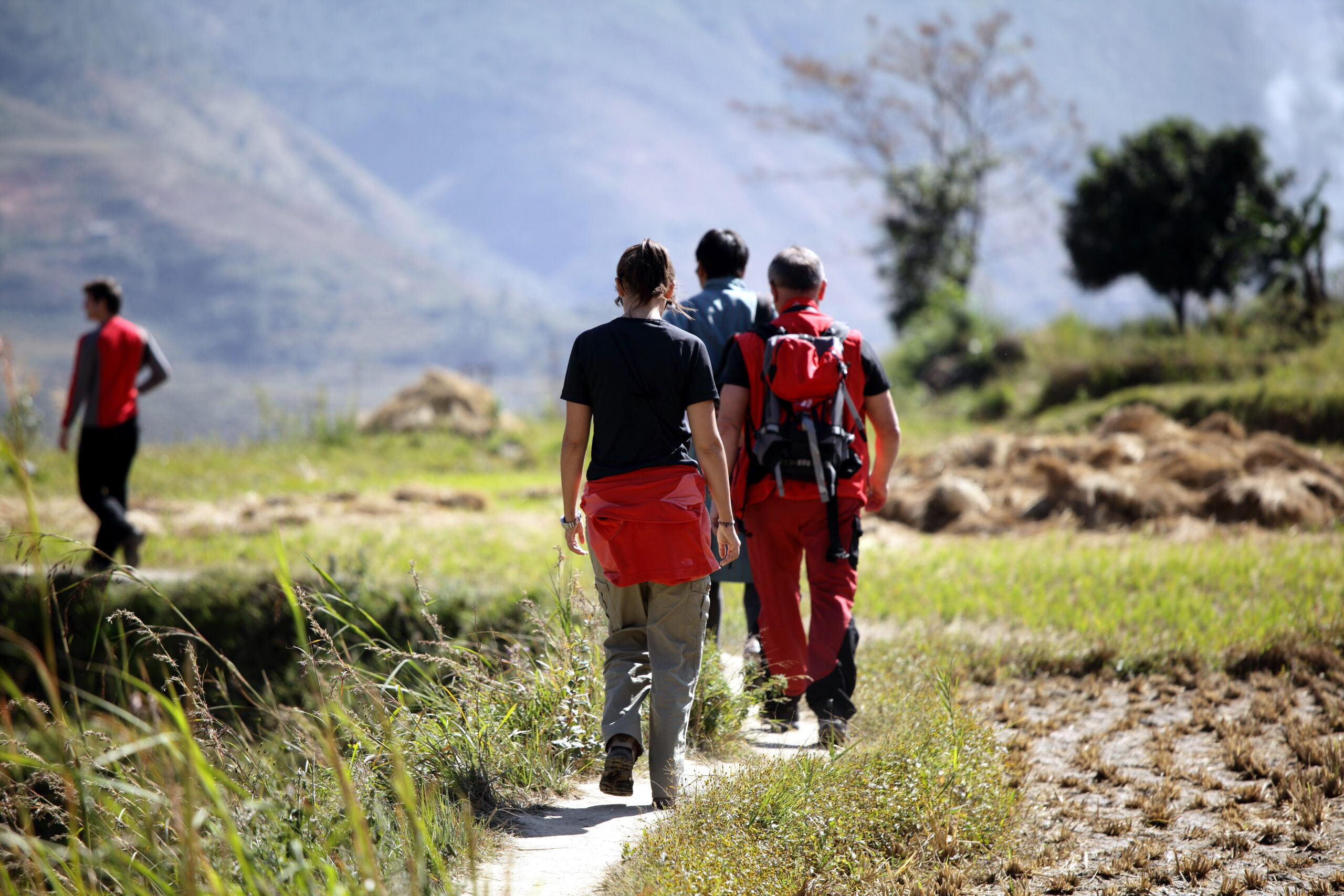 The Divine Madman Trail is a stretch of rich forest that begins in Dochula’s conifers before dropping dramatically into cool broad leaf, then warm broad leaf, and finally subtropical vegetation. This expanse of area is home to a huge diversity of plants and an estimated 250 species of birds, including the exotic Ward’s Trogan, and some 20 species of mammals such as the endangered red panda, even the royal Bengal tiger has been sighted there.

Although 21kms long, the trail is broken up into several segments with the national highway crisscrossing at several points. This makes entry and exit to different segments convenient.

Drawn by the trail’s rustic charm and authenticity, it is also the major attraction for the bikers . The divine madman trail is one of the best mountain biking trail for those who are seeking adventure in Bhutan. It is the ultimate show stoppers and one that demands respect.

Divine Madman Trail connects you to 21 villages. As you bike through this trail you will encounter golden rice fields,&  old manor houses. For a moment you will be carried to the world that is completely medieval, carefree and straight out of the fairy tales. The Divine madman trail was revived by Her Majesty Ashi Tshering Pem Wangchuck on April 23rd , 2016 to promote eco-tourism.

The trail takes you to the villages of Phallus. It tells you the story of Drukpa Kunley, ‘The Divine Madmam’. The madman who took sex to a different level altogether – a much higher and greater plane. His Sexcapades are enshrined in ubiquitous art, sculpture and folklore in accompaniment to his esoteric teachings that live on.

All these comes in live as you walk or bike through this divine madman trail. 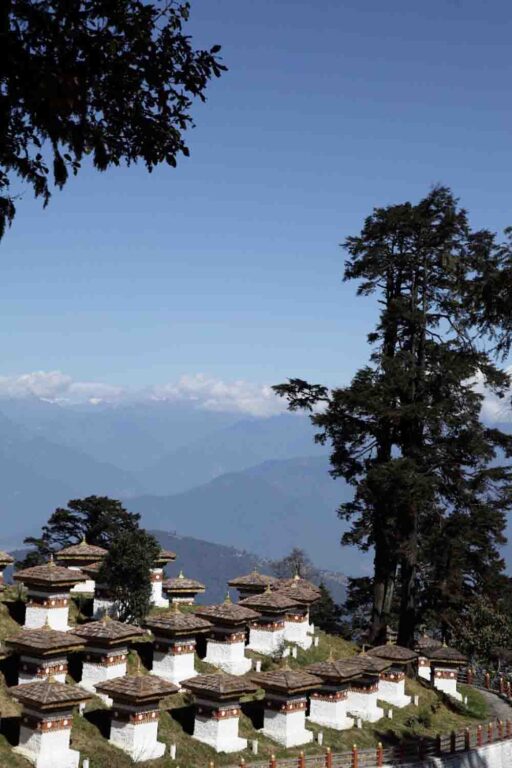 Furthermore after taking in a spectacular view of some of the highest mountains in the world you can head for the journey. The Divine Madman trail passes through primordial coniferous forests and drops down through temperate broad leaf vegetation towards the quaint village of Lomitsawa.

Just one thing. Leech alert. Nothing that can’t be solved with a liberal dubbing of saltwater and Szechwan pepper on your trekking boots.

After crossing the Thimphu-Punakha highway, you pass picturesque rice terraces and oak groves till you arrive at a remote village, Tahogang. It is much warmer and the place offers scenic retreats for a leisurely overnight camp. 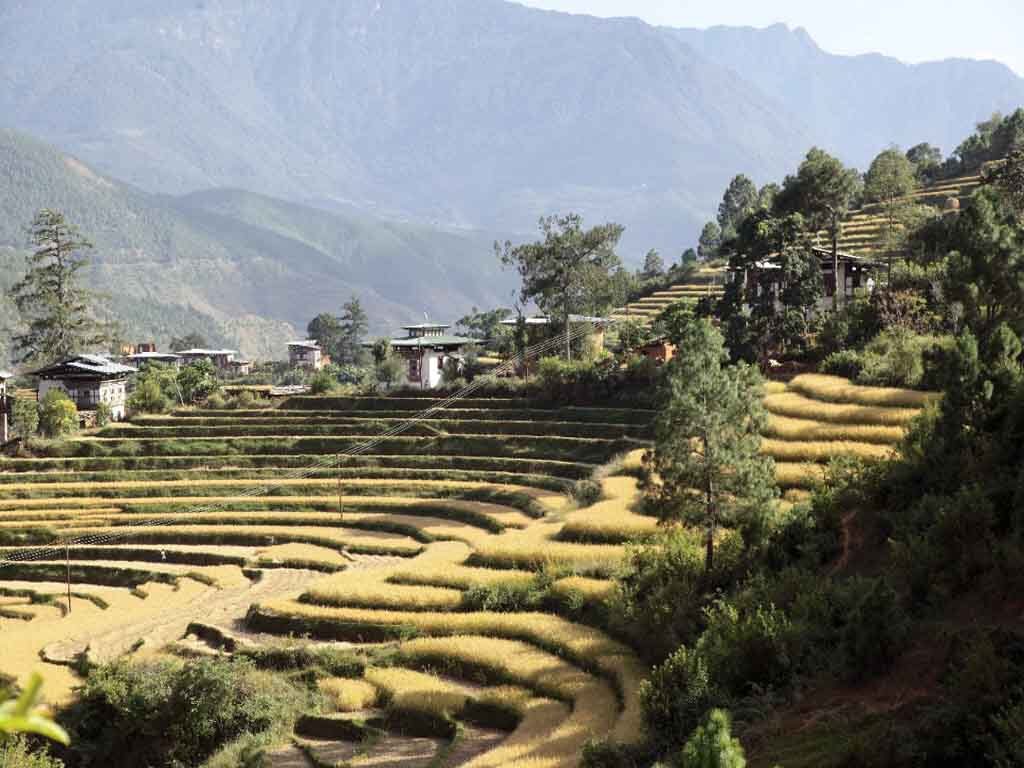 Alternatively, you can choose to lodge at village home stays and absorb the local farming and cultural experience. Living with the villagers and doing what they normally do gives you a chance to live the authentic rural Bhutanese life, to sight-do rather than sight-see.

Your engagement here also doubly benefits the locals by encouraging their youth to reverse the rural to urban drift that plagues much of Bhutan. The villagers in this part of the country are attempting to prevent their houses and fields from being abandoned. As the younger generation who typically seek greener pastures in urban sprawls. Your presence here contributes significantly to this community’s efforts to keep the kids home and so protect the area’s rich cultural and natural heritage.

From Tahogang, the hardier trekker may wish to plod on Thinleygang. This section of the Divine Madman trail undulates along the hill slope under the shade of a canopy of broad leaf trees. The temple at Thinleygang, which houses a school of boisterous monks, is worth pausing for a break. 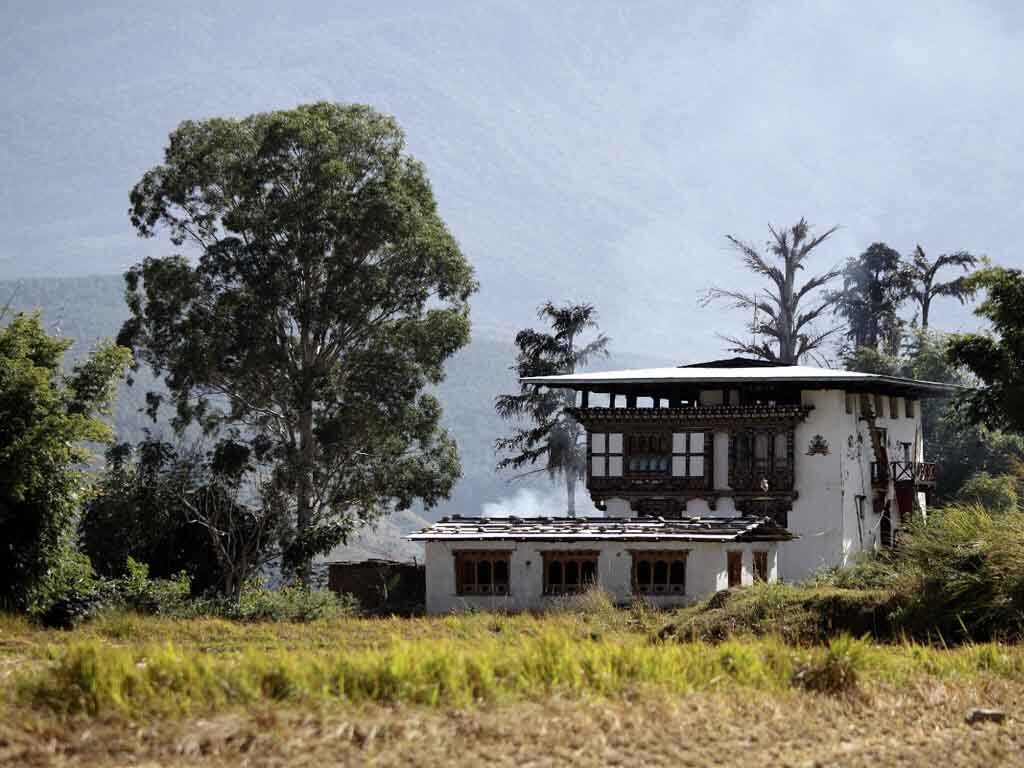 Moving on, you drop lower into the valley past pretty farms and across a suspension bridge . From here you straddle the course of the Toebirong Chhu stream till you arrive at another temple associated with Lam Drukpa Kuenley. This is where an arrow he shot from Tibet is said to have landed. This is Chhandana. The staircase which the arrow struck is still preserved in the house . The stories of Drukpa Kuenley are enshrined in the murals at the temple next door.

The Subdue of The Demon

If you are still up for more, the last leg of the Divine Madman trail should not be difficult. It is a gradual descent along the stream and an old irrigation channel. Easy peasy. The trails pass through three places that derive their names from Drukpa Kuenley’s demon chase. Bjichulum (meaning ‘sparrow valley’) is where the demoness turned into a sparrow in an attempt to evade the Lam. She fled to Chaasa (meaning ‘land of iron’) where she attempted another disguise as a pillar of iron.

She fled further to Rochhi Yuekha (meaning ‘ home of dogs’) where her last desperate attempt at thwarting the Lam’s advances was to turn into a dog. When Drukpa Kuenley persisted, she scampered over to the hillock where the Chimi Lhakhang(The Divine Madman Temple , Bhutan) now stands.

The Meaning of Chimi Lhakhang (The Divine Madman Temple Bhutan) 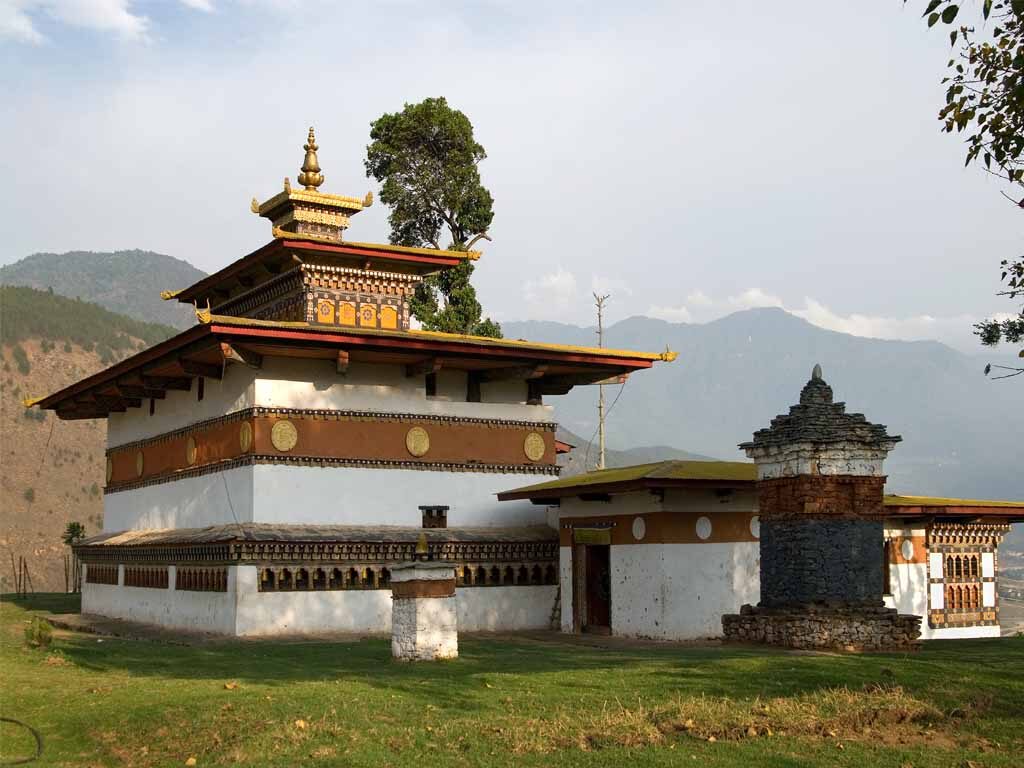 Which is where, lo and behold, you arrive at the end of the Divine Madman trail. It was here on this hillock that in an epic showdown, the demon of Dochula was turned into 100,000 dogs & was subdued. And just on that spot Drukpa Kuenley built a stupa . For this reason, the temple was originally called Khi-bum (‘100,000 dogs’) Lhakhang . Later  it became known as Chimi (or ‘ no dogs’) Lhakhang.

Buddhists often say that the point of a pilgrimage is the journey, not the destination. If you traverse the entire 21kms stretch or even a part of it, the trail of Divine Mad Man too might prove a pilgrimage.

The sacred history and your experience of it might help rejuvenate your spirit and purge a few inner demons along the way. It is also one of the Best Day hikes that you can take part. Or you can follow this trail using bikes.