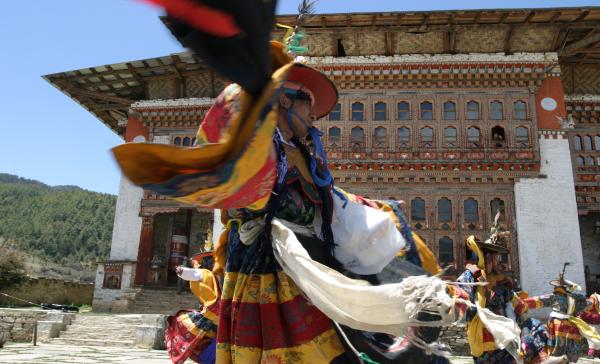 Ura Yakchoe is a beautiful summer festival conducted in the valley of Ura at Bumthang. Yakchoe literally means Yak offering.It is likely that the festival had animalistic origins before it was turned into a Buddhist ceremony.Even today , archaic rituals are performed during the festival by the priest dressed as the Bonpo to invoke the cattle god.

The Ura Yakchoe Festival is an interesting event to witness . It projects Bhutan’s effort to preserve Bhutan’s culture along with modernity. The festival begins with a long procession from Gaden (the seat of Ura’s local lama) to Ura. The procession passes through meadows , brooks which provide a magnificent backdrop to the event. Having arrived in the Ura valley , the festival begins with rituals of exorcism , followed by several dozens of sacred dances impregnated with deep spiritual wisdom, folk dances and the event continues for 5 days.

This tour takes you to central Bhutan. In this tour along with the Ura Yakchoe festival you will be able to enjoy stunning  landscapes, cultural sightseeing sites and ancient temples.

Fly to Paro, Bhutan, on Druk Air, the National airline of Bhutan. If you get a seat on the left side of the plane and the weather cooperates, you may have spectacular views of the high peaks of the eastern Himalaya, including Cho Oyu, Everest, Lhotse, Makalu, and Kanchenjunga—five of the highest peaks in the world—as well as peaks in Bhutan such as Jhomolhari, JichuDrakye, and Tsering Kang. After visa formalities at the Paro airport, your guide will meet you and drive you into town for lunch. Afterward, later drive to Thimphu,On the way visit Simtokha Dzong. This is the first ever fort to be built in Bhutan the capital of Bhutan. It is believed to have been built over the demoness that is buried beneath the fort where it now stands. It was built in the year 1629 by the Shabdrung Ngawang Namgyel. Later drive to Thimphu which is just 10 minutes drive from here. On arrival check in at the hotel.
The rest of the day is at leisure to unwind and absorb the beauty of this isolated kingdom.

Today, following breakfast at the hotel , you will enjoy a full day guided tour of the capital city. The morning tour includes a visit to National Library, which houses an extensive collection of Buddhist literature,with some works dating back several hundred years. Visit the nearby Institute for Zorig Chusum (commonly known as the Painting School),where a Six-year training course is given in the 13 Traditional Arts and Crafts of Bhutan.
Drive back to the town to have a good lunch at one of the restaurant designated by Bhutan Inbound Tour.

After lunch proceed to your next sightseeing points. It includes a visit to Kuensel Phodrang, called as Buddha Point, where you will be visiting the World's tallest sitting Buddha Statue. Next visit is to the National Memorial Chorten. On your way back visit the Centennial Farmers Market. The farmers from in and around Thimphu come here with their local produce for sell. It has an interesting mixture of Vegetables stall and Rice stall.

Later in the evening visit the Fort (TashiChhoeDzong) or the fortress of the Glorious Religion, the beautiful medieval fortress which houses most of the Government's office and King's Throne room.

Following breakfast at the hotel, drive up to Dochula Pass(3,088m/ 10,130 ft) stopping briefly here to take in the view and admire the chorten, mani wall, and prayer flags which decorate the highest point on the road. If skies are clear, we can see the spectacular Eastern Himalayas.

Later proceed for sightseeing, It includes the hike to the famous " Chimi Lhankhang "called as “TEMPLE OF FERTILITY”. The hike is mild and it takes you through the valley of Sopsokha and its beautiful terraced paddy fields before reaching the spot.

Later on your way back have lunch at the cafeteria . Spend about an hour before proceeding to Punakha. On arrival at Punakha check in at the hotel.Later visit to Punakha Dzong, the 17th century fortress which has played important role in building up of modern Bhutan followed by visit to local market.

After the morning breakfast drive to Gangtey.

On arrival visit the Gangtey monastery which was founded by Pema Thinley, the grandson of Pema Lingpa It was established in the year 1613 and the same year he became the First Gangtey Trulku(Re-incarnation).

We will take a hike down the Gangtey Monastery through the pine forests. It offers you beautiful landscape of the Phobjikha Valley.The hike will take you about 1.5 hours to 2  hours. Meet your driver waiting for you at the other end of the road. We will have a good lunch and after lunch we will drive from here to The Black Necked Crane Information Center. The center is well equipped with the Powerful Telescope and it has the best view for spotting birds if you are in the right time.

After a good breakfast begin your journey towards Bumthang. 30 minutes drive from Gangtey will reach you at the Pele La Pass ( 3,420m/11,220ft) where you will get good views of the snow capped mountains and you will also have a chance of seeing the Mt. Jumolhari during fine weather condition. Drive for another one hour and make a short stop at the Chendebji resort for a tea break. You will come across a monument resembling to the Swayambhunath in Kathmandu , Nepal called as Chendebji Chorten. Again drive for another one and half hour and it will reach you at Trongsa (2.200m/7,215ft).

On arrival in Trongsa visit the fort of Trongsa. It is the largest fort in Bhutan.

Have a good lunch at one of the restaurant designated by  Bhutan Inbound.

After your lunch and a short rest drive towards Bumthang for three hours across the Yotong La Pass which lies at 11,269ft. , then descend into Chumey valley, the first of the four Bumthang valleys.

Overnight at hotel in Bumthang

After breakfast before approaching to the festival venue drive towards the Jakar Dzong or also called as castle of white bird which is perched on a hill above the Chamkhar town. Later proceed to Ura for witnessing the Ura Yakchoe.

Ura : It is unarguably one of the beauty of Bumthang. It is must vist place if you are in Bumthang. All the meadows ,landscape , the buck wheat and the barley fields will is simply amazing to see.

Ura Yakchoe Festival : The festival is famous for a dance known as Ura Yakchoe. Legend has it that once there was a kind lady and one fine day a Lama came by and asked for water to drink. The woman being kind went to fetch the water for the Lama but the Lama was nowhere to be found leaving a sack behind. Her curiosity grew and when she opened up the sack she found a relic inside which wasn’t an ordinary one. The relic is put on display annually during the festival. It has been passed down from generation to generation and the descendants still owns the relic.

Have a picnic lunch with the locals which will already be organized by Bhutan Inbound Tour.
After the festival drive back to Bumthang.

After your morning breakfast check out from the hotel and drive back towards Punakha. On arriving at Trongsa Visit the Tower of Trongsa a watch tower before which is now converted to a Museum . Have lunch at the Cafeteria at The Museum. Get some rest after your lunch and continue with your journey towards Wangdue. Make a short stop at Chendebji Resort for a tea break. Again after your tea break drive to Punakha.

After a good breakfast begin your journey towards Paro. The journey will take you about four hours to five hours. Make a stop at the Dochu La Pass (3140m) for your lunch while you can enjoy the magnificient view of the eastern Himalayan ranges.

After your lunch break resume your journey to Paro. On your arrival drive to the National Museum of Paro, once a watchtower, built to defend Rinpung Dzong during inter valley wars of the 17th century, Ta Dzong was inaugurated as Bhutan's National Museum in 1968. It holds fasinating collection of Arts,relics,religious thangka paintings and Bhutan's expuisite postage stamps and later visit the Paro Rimpung Dzong meaning the fortress on the heap of jewels or the fort of Paro.
Drive back to the town to have lunch at the restaurant designated by Bhutan Best inbound Tour .
After lunch drive to the Drugyel Dzong (the victory fort) . The fort is ruined. It has been destroyed by the fire and renovation is still going on but you can have the closer view of the Jumolhari ( 7140m) form here. On your way back visit the Kichu monastery . It is the one of the oldest and the first ever Buddhist monastery to be built in Bhutan. It was built in the 8th century.

Overnight at hotel in Paro.

Today we will hike up to the Taktsang (Tiger’s Nest) monastery, the most famous pilgrim site, which sits precariously at  the elevation of 3180m. According to the legend, it is believed that Guru Rimpoche, the 8th century Spiritual Master, flew to this location on the back of a tigress to meditate.

We will have lunch at Cafeteria Restaurant halfway up on the mountain. Explore the monastery and hike back to Paro.

In the evening after the tiring hike you can rejuvenate your muscles by soaking yourself in Traditional hot stone bath.

Later in the evening we will have a dinner at Bhutanese Farmhouse.

Our first trip to Bhutan was this 11 day adventure traveling from east to west. What an amazing country. I'm so happy we chose Bhutan Inbound as our tour company. Thinley was very responsive and trustworthy with all my requests while planning our trip. They exceeded our expectations with extra special gifts and over the top kindness. Our guide and driver were very professional, knowledgeable and accommodated all our daily crazy requests. I think we my be friends for life :)
We truly experienced the Happiness Bhutan has to offer. Thank You Bhutan Inbound group.

This was my second time visting Bhutan. My first trip to Bhutan covered mostly the western part, which was amazing but this time I wanted to explore further to the central part of Bhutan as I have heard lots of beautiful things about its landscape and the culture. Attending the Ura Yakchoe festival in the beautiful Ura valley was the cherry on the cake of the central Bhutan Tour. It was an authentic experience seeing people gather to witness the sacred festival and sound of the religious instruments echoing the courtyard of the Ura community temple was surreal.

The tour was conducted very well, couldn't have asked for anything better. The accommodations provided was great, the vehicle was private, the guide (Mr. Phurba) was courteous and the driver (Pema) was careful while driving in the mountainous terrain.

Ura is a must visit place if you have comfortable amount of time to spend in Bhutan. 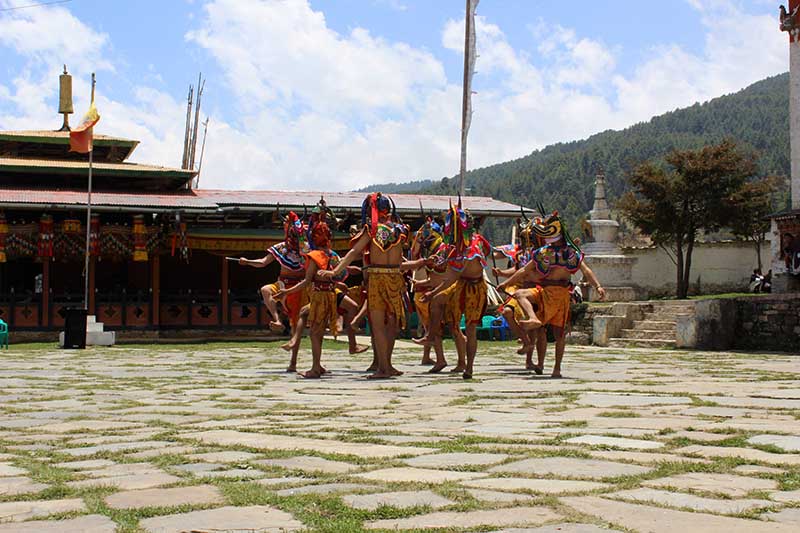 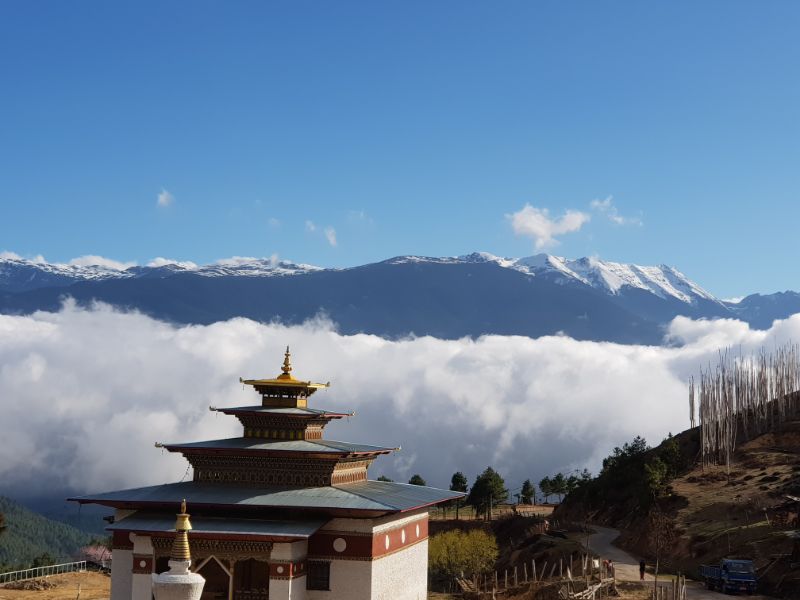 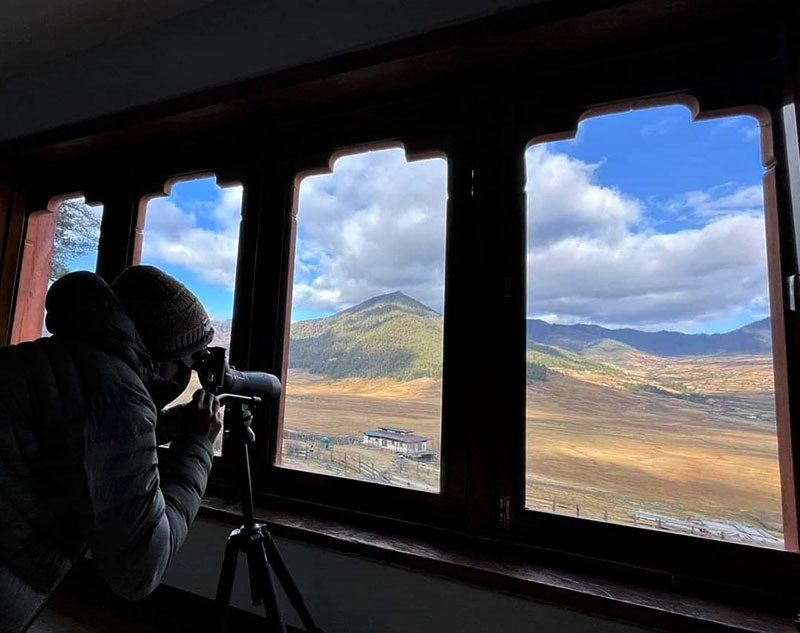 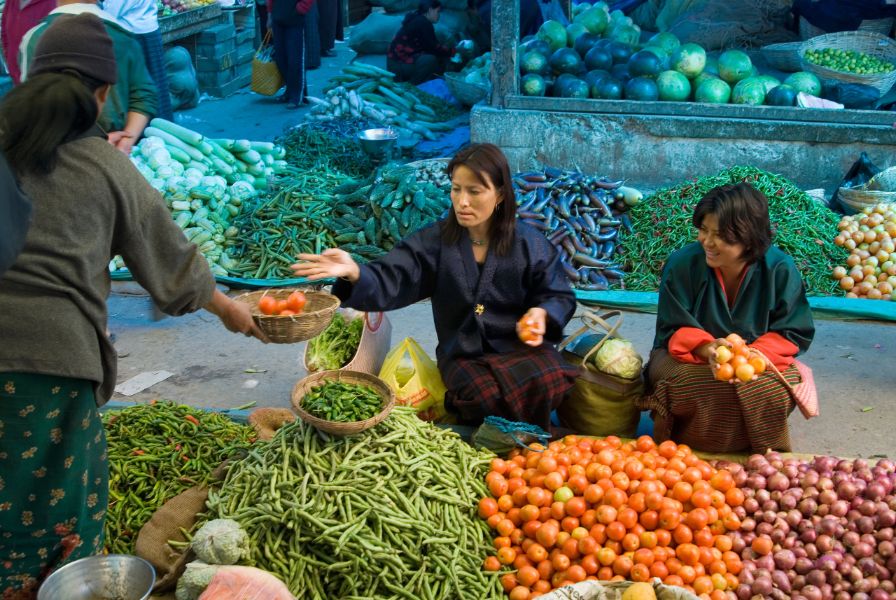 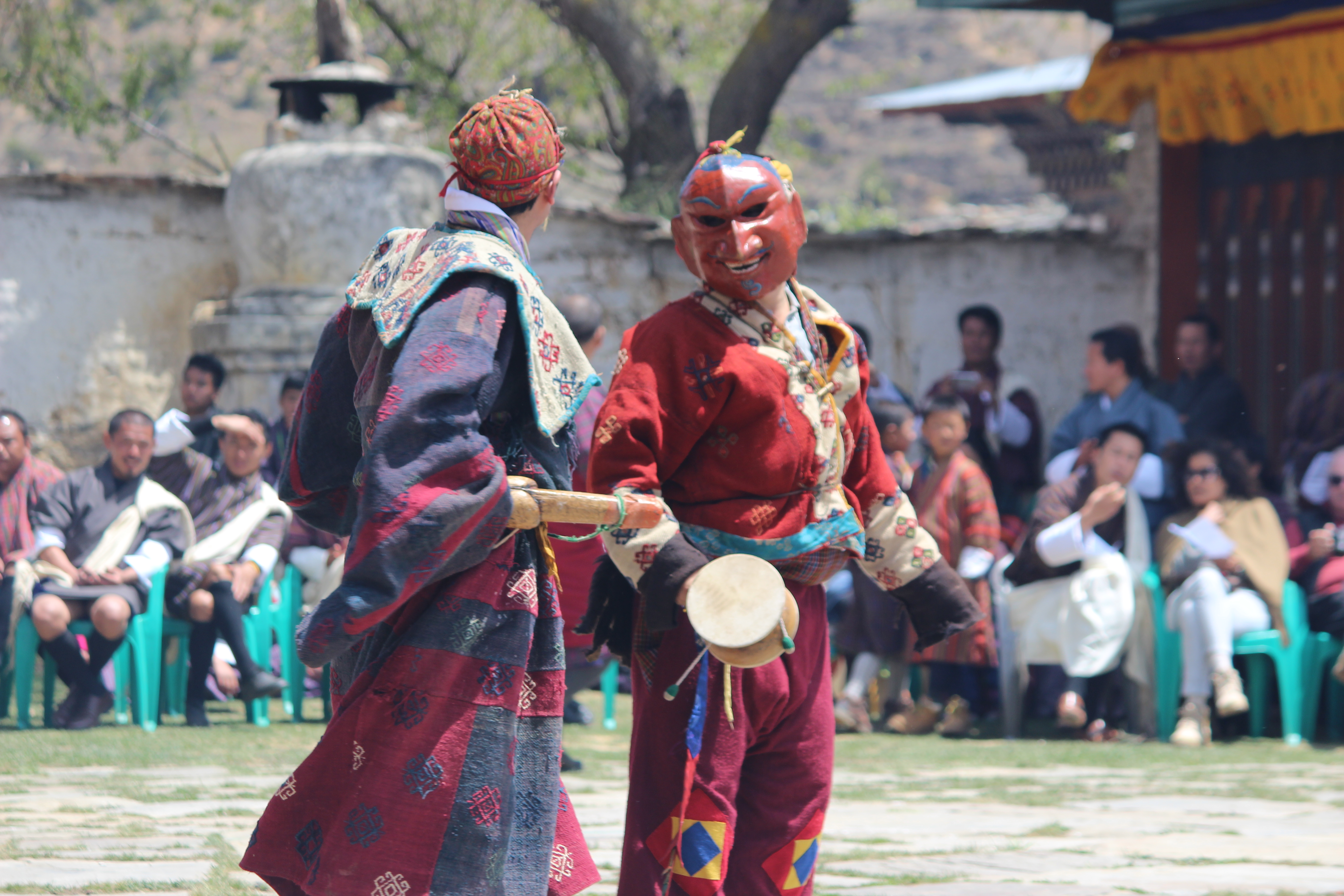