Dodeydra hike in Thimphu will take you back in time to Dodeydra monastery. The name Dodeydra has been derived from the word 'split rock' from where Ter (Hidden Treasure Teachings) in form of scripture was discovered.

There are 3 different routes that lead us to Dodeydrak.

The shortest route starts from Samteling Palace, but only monks residing at Dodeydra are allowed to use this route and it is closed for anyone.

So, this leaves us with two routes, one route starts from Jungzhina and the other one from Dechencholing.

If you love hikes and forests then you can take the route from Junngzhina.

The monastery is hidden inside the mountain and gives you a feel of the lost land. The temple was established as per the prophecy of Chief Abbot Yonten Thaye who was then working as a teacher in the Phajoding monastery.

The monastery is beautifully built-in between the split rocks.

There is also a rock nearby from where holy spring water drips. It is believed that abbot Yonten Thaye visited Tibet Tsari-Nye 3 times. On his last visit, he wanted to bring something to Bhutan as it was difficult for Bhutanese to go all the way to Tibet. Therefore, he brought the rock from Tsari-Nye which when placed at Dodeydra, holy water started flowing. The rock is supposed to have the Ushnishavijaya mantra encrypted in it and locals believe that drinking this water has the power to wash away sins and promotes good health and prosperity.

Alongside the temple, you will see numerous houses which shelters 175 monks studying at Dodeydra.

They also have a small guest house; if you're visiting and interested in meditation or Buddhism, you can stay for one to two nights and learn how Buddhism is practiced in Bhutan. 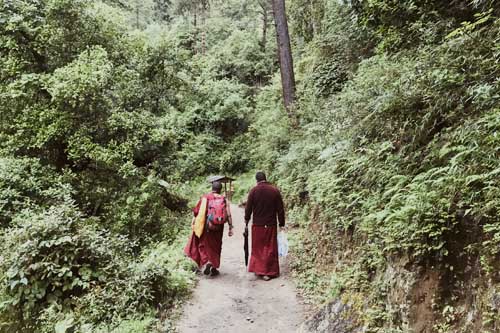