Situated at an altitude over 3,500 meters, the exotic valleys of Merak and Sakten have been home to the Brokpas for centuries since their displacement from Tsona in Southern Tibet. The nomadic indigenous group of eastern Bhutan, the Brokpas seasonally move their herds of livestock from the lower valleys in the winter to the higher pastures in the summer. While polygamy is a prevailing practice as well, marriage among. Like the rest of Bhutan, they are fond of archery and are skilled in games of accuracy. Women are particularly well-known for their singing and they love to perform from their wide repertoire of festive songs dedicated to gods and goddesses, as well as the universal themes of nature, youth and old age. Brokpas prefer to wear their traditional attire spun from yak hair. Traditional wear for men comprise a black hat with five long fringes hanging from the sides. Women usually wear their long hair tied up in plaits with colorful ribbons. An apron reaching to their knees is tied at the waist.  Fond of jewelry, they wear long strands of corals, cat’s eyes and necklaces of semi precious stones.

The diverse rituals and customs of the Brokpa people make Merak and Sakten an interesting place to visit, especially each autumn when they honour their mountain goddess Jomo Kuengkhar by observing a two-day festival to seek her blessings for prosperity. The festival is also an occasion to witness the annual naked terchaam dances of the Brokpas and the cultural splendor of the Ache Lhamo dances performed by herders.

There are also several interesting temples and monasteries in both valleys:

The Sakteng Wildlife Sanctuary is another interesting place to explore. It is the only reserve in the world dedicated to protecting the habitat of the yeti or abominable snowman. The sanctuary is mountainous and rugged and boasts a diverse variety of flora and fauna .The park also has rare blue poppies,Bhutan National flower. Premilus and gentiania. that explode in a riot of colors in the spring.

On landing  at Paro, drive to Thimphu, the capital. The next day, I transferred to Bumthang  and from there to Trashigang, the furthest eastern region of Bhutan. Overnight in Trashigang, and the following morning take the road further east to Radhi village which is about 21 Km and takes about an hour.  After Radhi there is a dirt road that leads to Merak Village. It is about 40 Km and takes about 3 hrs to reach there.

Sakteng is better approached from Merak. From Merak a full day’s trek brings you to the riverside campground at Miksa Teng. Next day take a gradual three hour walk through some pleasant woods until your arrival in Sakteng. 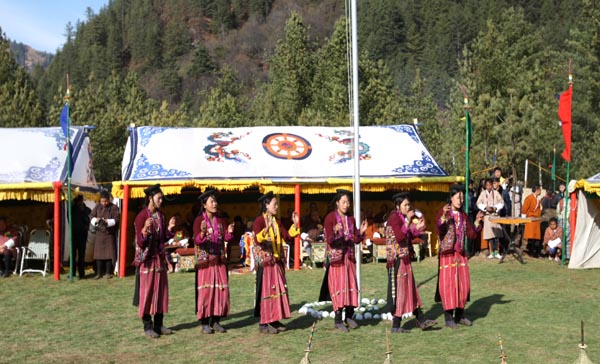