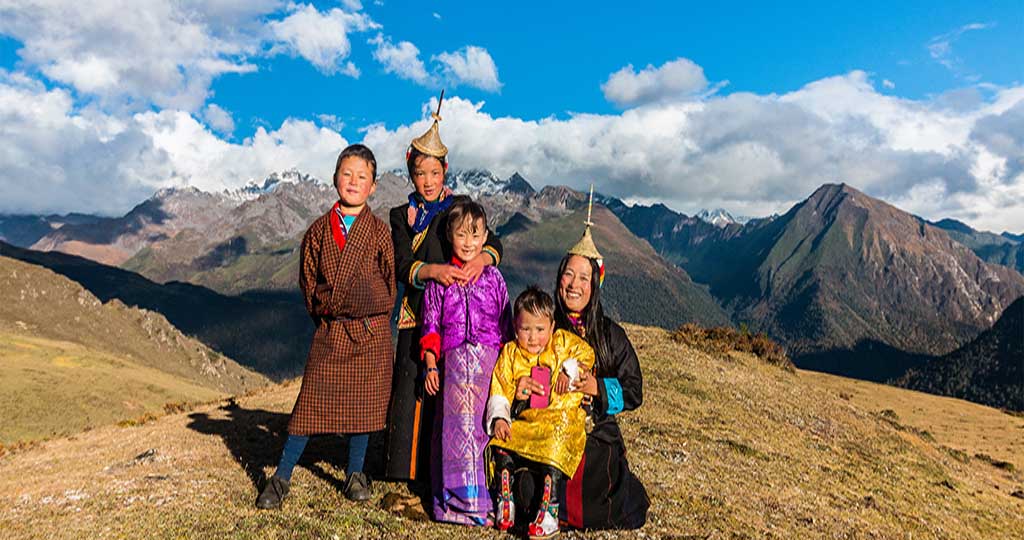 The two-day Royal Highlander Festival is an annual celebration of nomadic highlander traditions in Laya, Bhutan.

The festival began as the brainchild of the fifth king of Bhutan, Jigme Khesar Namgyel Wangchuck. Before the advent of the Royal Highlander Festival, the mountainous northern areas of Bhutan lacked representation on the country’s festival calendar, as most Bhutanese festivals occur in more “accessible” regions of the country.

To resolve this issue, His Majesty the King of Bhutan initiated the Royal Highlander Festival to bring some light and love to the hardy highlander people thriving in the Himalayas of northern Bhutan.

Initiated by the Fifth King, the Royal Highlander Festival takes place in Laya, a remote, highland village located at around 4,000 meters (12,000 feet) and enjoys one of the most scenic locations for a Festival.

There are no motorable roads to Laya and the only way to get there is by trekking for 2 days. Apart from preserving and showcasing the unique culture, the Festival itself is a celebration of the nomadic life and there are many interesting events held within the 2 days.

The Royal Highlander Festival is the newest Bhutan festival. Festivals dominate the land of Bhutan, which is known for its celebrations, and it’s easy to see why the Bhutanese measure life with a happiness index over the western world’s GDP. The Highlander festival is a day filled with goodwill and celebration.  If only all countries worked on the quality of life over the things you have.

Started by the King of Bhutan to promote highland culture, improve the economy and to bring tourists to the region, it is a hearty display of what life is like in the Himalayas. The king himself attends the festival to say hello to visitors and if you are a foreigner, chances are you will be able to speak directly to royalty.

So far there are very few tourists visiting the Gasa region. Attending the Royal Highlander Festival certainly feels like a local experience rather than a canned tourist display. To get to the festival it is a two-day trek from Gasa to Laya.

This picturesque village makes for a beautiful backdrop with extraordinary views of the surrounding peaks. The Snowman Run kicks off the festival. In this race, local men and women race, running 25km up and across the Himalayas of Bhutan. The festival takes place another 500 meters up the mountains and everything else gets shut down as all the celebration takes place an hour’s trek further up.

You can meet so many locals on the way up to the Royal Highlander Festival, as you will share the trail with local tribes walking up to take part in the festival. The wrestling competition is one of the highlights of the festival. The festival attracts communities from all over Bhutan and many tribes come down from the High Himalayas to compete in races and showings of their animals.

You have a chance to see yaks up at 4400 meters and they are one of the most beautiful animals.

Even the dogs get awards at the Royal Highlander Festival. There are events for yaks, horses, cows, and the Himalayan mountain dog. Like the yaks, mountain dogs cannot survive at low altitudes so you must trek up to be able to see them.

There are other events like the strongman competition, where you will watch people go through an obstacle course where women carry their mates upon their backs across the field.

The couples then pull heavy sandbags across the course stacking them one atop another before loading them onto the male’s back where he runs back to the starting line to finish the race.

Everything seems to be in very good fun. This is a festival of celebration and happiness more than the competition.

Something that is very impressive, is how the festival offers free food, water, and tea to spectators.

Great care is taken to keep the food safe as servers wear gloves, hairnets, and uniforms as they scoop out large portions of dhal, rice, and potatoes. They go around offering cups of water and tea and there are several stations for recycling and trash. Bhutan is leading the world in responsible tourism thinking of every little thing. During the entire trek up to Laya, you can notice the pits dug for garbage and stations set aside for water bottles.

The Royal Highlander Festival is only in its second year but it is going to expand in the future.

It is going to rotate to other villages around the Himalayas.  As time goes by, it is gaining more and more popularity. Locals are thrilled with it. When attending a Bhutan festival, you will have the opportunity to feel the happiness of the people first hand. There is something soothing about the people of Bhutan and they immediately put you at ease.

From local Layaps in pointed beaded headdresses to groups of Monpas in dreaded yak hair hats, highlanders of all ethnicities congregates in Laya to share their culture with the rest of Bhutan. Royalty, volunteers, and visitors from all over Bhutan complete the crowd, coming together to ensure the festival’s success. Some foreigners visit too, however, they are by and large a minority for now. The fact that any outsiders showed up at all is impressive in itself, as traveling to Laya, even for a native, is a multi-day endeavor.

Over the course of two days, men wrestle, horses race, and children dance. Tireless runners scale mountains while clueless cows win prizes. The Royal Highlander Festival in Bhutan is a visual treat of colors, cuisines, and culture. Before you dive into this colorful world, however, there are some important things to keep in mind.

The Gasa – Laya trek is a high-altitude trek of moderate difficulty on very uneven terrain at times and involves around 1,500 – 2,000 meters of vertical ascent. Horses are available for carrying luggage along the route. The trekking route began from a starting point outside Gasa, and takes two days for a group of generally fit, though not overly athletic people. Keep in mind that the weather can be quite unpredictable in the mountains, and inclement weather can slow things down significantly. These are the Himalayas we’re talking about! Fit as you may be if planning on doing any part of the Gasa – Laya trek, be sure to get a bit of exercise in before leaving home! Medical professionals recommend doing practice treks with a backpack on or taking up cycling for a time. Also, walking sticks are your friends.

That’s all you need to know for now. The rest is for you to find out. The Royal Highlanders festival of Bhutan awaits your arrival.